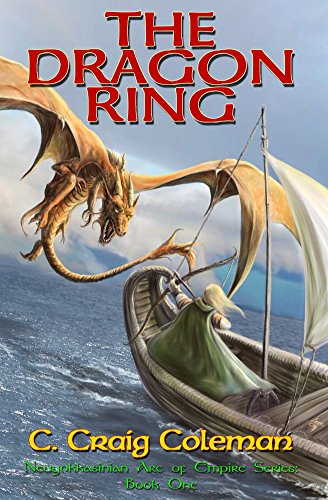 This is the coming of age phase book in my six book epic fantasy series written to the adult audience but appealing to HS seniors through forties. This book covers boy to manhood growing character and integrity to handle unique powers. The series spans the life of the protagonist, Saxthor, and the rise of empire.

This coming of age, epic fantasy occurs at the twilight of primal beings and the emergence of man. Wizards, witches, elves, dwarves, trolls, ogres, orcs, dragons, and new fantastic creatures still interact with men in this classic struggle between good and evil.

The Dragon Ring opens in a politically charged kingdom on the Powterosian continent. The reigning queen has recently ascended the throne at the insistence of the nobility who forced her corrupt brother to abdicate. The former queen, a soulless upstart, ruthlessly schemed to attain power and position. The sudden loss of status has unhinged her. She's resorted to witchcraft to destroy her sister-in-law and the royal family to regain the throne. Caught in the middle are the royal children including young Prince Saxthor, the second son and spare heir.

The unexpected discovery of Saxthor's unique powers aggravates the political conflict. The witch feels threatened and attempts to kill Saxthor shattering his carefree world. His mentor wizard sends Prince Saxthor racing into exile that he might survive to grow into his mysterious powers. But he's followed.

The witch also has a co-conspirator, a ruthless warlock. He's using her for an end she's unaware of. The sorcerers draw in the ultimate personification of power, dragons, bending them to good or evil in the conflict for ultimate control. Only Saxthor can alter the looming war's outcome.

Can Saxthor survive his pursuers' attacks? Will he overcome his own doubts and rebuild lost confidence? Will his character develop and restore his self-assurance sufficient to face his worst fear? He will need exceptional character to control his unique gifts without succumbing to them. This epic provides fantasy entertainment atop undercurrents of political and psychological depth.