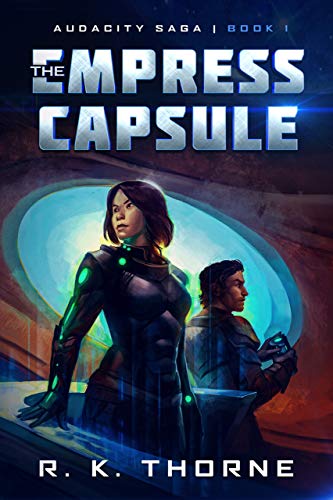 Meet Kael Sidassian: disgruntled mercenary and glorified guard of doors. Forced into a life he would never have chosen as a cyborg merc, he's lost not only his freedom but also his ability to feel anything—or appreciate the opposite sex—because of his cybernetic augmentations. That is, until last week when a renegade scientist blew the lock off his testosterone and reopened his eyes.

A chance to free himself has landed in Kael's lap. He can run and hope his "employers" forget he was ever born. He just needs to get a ride off this backwater planet and deliver the strange capsule that's been foisted on him. One last mission.

Unfortunately for Kael, there's only one ride off this planet. And it's on the starship Audacity, led by famed war veteran Commander Ellen Ryu and her elite marines. Dangerous, competent, well-trained, female marines.

Commander Ryu is not to be trifled with, and she doesn't trust easily. And she certainly doesn't appreciate flirting. As an enemy rises to face them both, Ryu could be Kael's savior—or the one to finally end him.

Because these women are on a hidden mission to seek and destroy abuses of technology anywhere in the galaxy.

Abuses like the strange capsule hidden in his cabin.