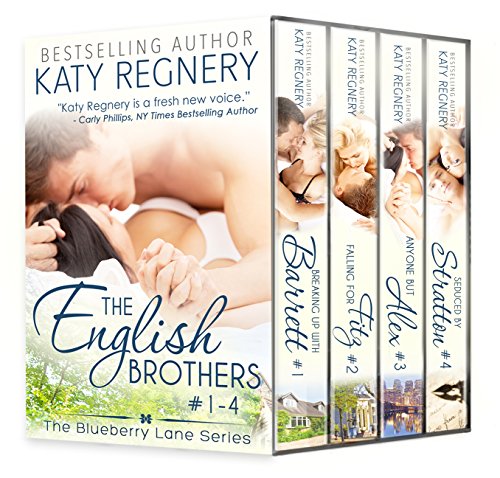 Meet the English Brothers of Blueberry Lane! Follow the love lives of the Philadelphia-based, wildly-handsome English brothers who are all on the look-out for love (whether they realize it or not!)

Breaking Up with Barrett: When business partners suggest that a fiancee might soften Barrett English's image over business dinners, he approaches the gardener's daughter, Emily Edwards, for the "job" of fiancee. And while love wasn't necessarily on Barrett's radar, he begins to realize that Emily always has been. But will his take-no-prisoners boardroom tactics work on the heart of the woman he loves?

Falling for Fitz: After ten years apart, childhood sweethearts, Fitz and Daisy, are reunited when Daisy moves home to get married. Both are surprised to discover that their feelings for one another are as strong as ever, but old hurts and a new fiance stand between them. Can Fitz get Daisy to fall for him again before it's too late?

Anyone but Alex: Alex English, a notorious playboy, reunites with his childhood friend, Jessica Winslow, after years apart. Though both attempt to embrace a friendship, their passion won't be denied. Between disapproving brothers, scheming exes, and the biggest deal of English & Sons' history, their budding romance is going to be put to the test. The question is...will it be strong enough for happily ever after?

Seduced by Stratton: Stratton English, the hottest, youngest, most devastatingly handsome CFO in Philadelphia, has a problem: women make him nervous. Really nervous. Quirky Valeria Campanile, a PhD candidate who studies Courtship Rituals, can't seem to find herself courted. When Stratton helps Valeria with a financial problem, she is anxious to return the favor, and just might find herself being seduced by Stratton!