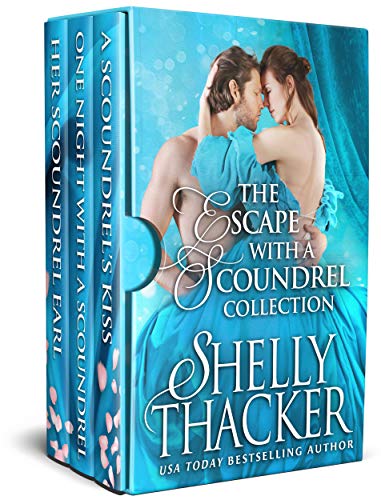 The Escape With A Scoundrel Collection

In this “exciting and exquisitely romantic” boxed set, three sinfully hot English lords find themselves on the wrong side of the law—and willing to break all the rules to protect the women they love.

Her Scoundrel Earl - A wicked earl makes a dangerous offer to a dashing widow
(Escape with a Scoundrel Series, Book 2)
Daring young widow Lady Elizabeth Barnes-Finchley agrees to a temporary alliance with the notorious Lord Marcus Worthington, to outwit a mutual enemy. But their secret partnership soon puts both their lives at risk...and falling in love was never part of the plan. "Thrilling, adventurous, fun, sexy!" -BookDivas

One Night with a Scoundrel - A smuggler falls for a princess in disguise
(Escape with a Scoundrel Series, Book 3)
Disguised as a lowly dancing girl, Princess Ashiana sets out to reclaim a priceless jewel stolen from her family by English smuggler Saxon D'Avenant. But when her secret mission goes awry, she finds herself trapped aboard Saxon's ship—and swept into forbidden passion in her enemy's arms. "Daring and sensual. Readers will be enthralled!" -RT Book Reviews

A Scoundrel's Kiss - A British spy kidnaps a lovely French scientist
(Escape with a Scoundrel Series, Book 4)
Brilliant scientist Marie LeBon awakens in Paris with no memory of the accident that has erased her past. A handsome rescuer comes to free her, claiming to be her husband...but he's an imposter, Max D'Avenant, a British agent who's soon torn between loyalty to the Crown and love for this woman he's sworn to betray. "Shelly Thacker has a unique and dazzling talent!" -New York Times Bestselling Author Lisa Kleypas