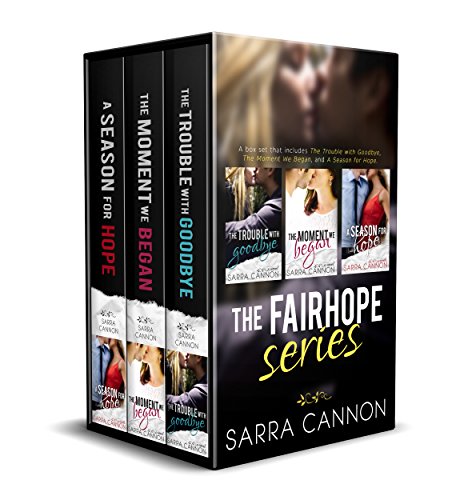 First three books in this emotional New Adult Contemporary Romance series.
This set includes:
-The Trouble With Goodbye (Leigh Anne and Knox)
-The Moment We Began (Penny and Mason)
-A Season For Hope (Bailey and Judd)

The Trouble With Goodbye (Book 1: Leigh Anne and Knox)

The Moment We Began (Book 2: Penny and Mason)

The moment they both believe all hope is lost is the moment something real finally begins.

I have loved Mason Trent for years, but I've only been sleeping with him for one.

None of my friends know about our secret passion. He's in my bed one night and in the arms of someone else the next. And it's tearing me apart.

I've done everything I can think of to make him mine, but the more I cling to him, the harder he pushes me away. I'm spiraling out of control, not sure how much more of this I can take. A girl can only bend so far until she breaks. And when I do, I break completely. I'm talking about one night of bad decisions, all leading to a my-world-will-never-be-the-same kind of moment. A moment where I need Mason more than ever. True to form, though, he's running.

But I intend to go with him this time. I'm willing to leave my money, my family, my friends behind for this one last chance to see if he could ever really love me the way I deserve to be loved. I'm willing to sacrifice forever if it means one real moment with him.

A Season For Hope (Book 3: Bailey and Judd)
Being dumped just before the holidays was my worst nightmare. I'd spent so many years thinking Preston Wright was the one for me that when he told me it was over, I thought I'd rather die than face the future.

I never expected someone like Judd Kohler to come crashing into my life. Literally. He was coming out. I was going in. My face got in the way. You get the picture. It was an accident. Running into him twice in one day, though? It started to feel like fate.

My mother always says Christmas is a magical time of year. A season for hope. All I know is that just when I thought I'd lost mine, hope somehow found its way back to me.

Just in time for Christmas.