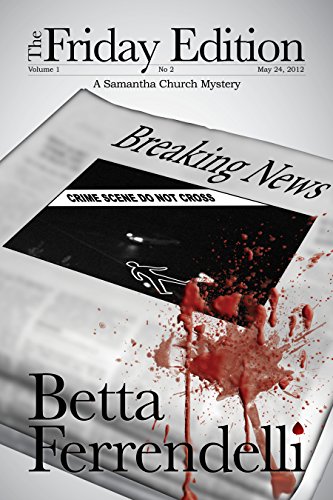 Investigative newspaper reporter Samantha Church must get through a corrupt police department and her own demons to discover her sister's murderer.

Snow isn't all that's falling in Denver, Colorado on Christmas Eve.
A beautiful, young district attorney tumbles from her balcony to her death.

Police suspect suicide, but the DA’s sister, newspaper reporter Samantha Church, isn’t buying it.
Samantha discovers evidence linking her sister to a drug smuggling case and quickly learns she has stumbled onto a major news story. She must summon the courage to not only face a cartel of criminals, but her own fears and shortcomings when she is confronted by the inescapable specter of a far greater enemy—her addiction to alcohol. Samantha’s dependency has not only cost her job at a major metropolitan daily, but, worse, custody of her daughter, April.

Samantha pursues her sister’s killers, maneuvering through a minefield of intrigue deliberately set out to divert her from the truth. Despite being betrayed, physically beaten and facing the possibility of sharing her sister’s fate, Samantha refuses to stop her investigation. However, when the killers threaten to harm April, Samantha realizes that, for her daughter’s sake, she can no longer continue the investigation on her own. She knows she must swallow her pride and turn to her ex-husband and police detective, Jonathan Church, for help.

Can Samantha ultimately prevail—find her sister’s killer, write the story of her career, confront her drinking problem, and finally begin to change her life, or will she and April become the killer’s next victims?