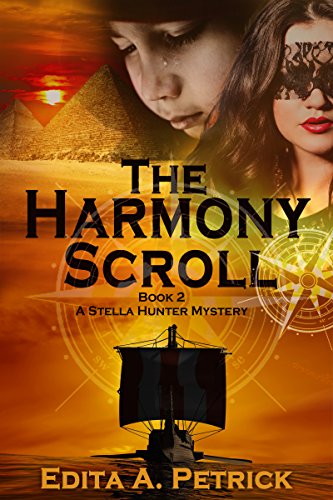 Stella hunter’s young son carries a dormant ancient curse within him. Though she’s destroyed the amulets that activate the curse, Gabriel’s life is shadowed by the dark magic. When she learns the contents of a golden scroll can break the curse forever, Stella goes after it with a vengeance...and heaven help anyone who gets in her way!

Stella Hunter's adopted son was born with a curse. The curse lies dormant within him and the amulets that awaken it have been destroyed, but the curse is still a death sentence shadowing Gabriel's life. Stella discovers Gabriel can be free of the curse forever. But the golden scroll holding the incantation that can free him was lost twelve hundred years ago.

It's why, almost a year to date from the time Carter braved a horrible blizzard just to be able to knock on Stella Hunter's door, the two are following a trail again—this time searching for a mysterious scroll that a few unreliable historians documented in the course of time. The incantation seared into the gold or calfskin scroll (no two historians can agree on the medium) is a powerful tenet, thought to be capable of removing all curses, ancient and modern. Stella clings to her belief that she'll be able to find the lost scroll. She'll then read the incantation seared into it by the Almighty's hand and the Peacetaker curse will dissipate. Carter thinks she's being insanely optimistic, but follows in her footsteps because more than one life depends on his protection. He's not wholly convinced that the eight year old boy Stella adopted is the Fourth Horseman of the Apocalypse, but as a father who lost his teenage daughter to tragedy, he's still struggling with guilt.

In this fast-paced, action packed adventure, nothing is as it seems and everyone Carter and Stella come across, seems to be wearing a mask…that seldom remains in place long enough for Carter to figure out whether they're facing a friend or foe.