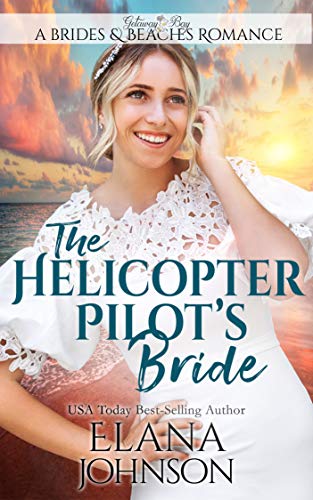 Charlotte Madsen's whole world came crashing down six months ago with the words, "I met someone else." Escape to Getaway Bay with Charlotte, and join the Brides & Beaches series for some seriously sweet beach romance.

A helicopter pilot, the woman whose house he's squatting in, and their journey toward their own beach wedding...

Charlotte Madsen's whole world came crashing down six months ago with the words, "I met someone else." Her marriage of eleven years dissolved, and she left one island on the east coast for the island of Getaway Bay. She bought a run-down house overlooking the bay, knowing she'd need all her fixer-upper skills to get it in shape. Which is just fine. She's hoping as she overhauls the house, she'll get a life makeover too.

She was not expecting a tall, handsome man to be flat on his back under the kitchen sink when she arrives at the supposedly abandoned house. She wasn't expecting to get drenched when the non-plumber twists something the wrong way. And she certainly wasn't expecting her heart to be well enough to feel anything for anyone.

But former Air Force pilot, Dawson Dane, has a charming devil-may-care personality, and Charlotte could use some happiness in her life. But everything with Dawson isn't sunshine and unicorns. He's estranged from his family, though he does speak to one of his brothers. And he's never committed to anything except his career, even choosing flying over an engagement years ago.

Can Charlotte navigate the healing process? Can Dawson finally make a commitment to a woman? Or will he and Charlotte decide a relationship is just too hard?