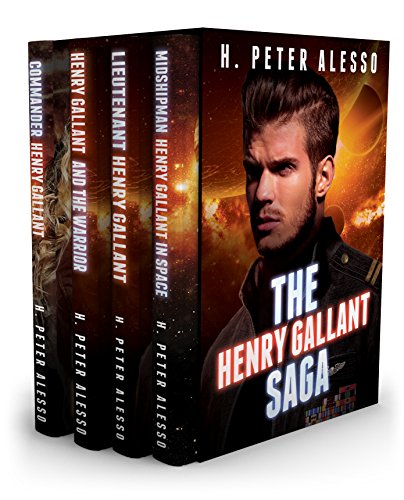 As the last star fighter in squadron 111, Midshipman Henry Gallant is on his way from Jupiter to Mars. With the United Planets' fleet on the verge of annihilation, he can expect no help as he passes through the asteroid belt and threatening aliens. With so much uncertainty about the aliens' capabilities and intentions, analyzing the captured computer equipment in Gallant's possession could prove crucial.

BOOK 1
As the last star fighter in squadron 111, Midshipman Henry Gallant is on his way from Jupiter to Mars. With the United Planets' fleet on the verge of annihilation, he can expect no help as he passes through the asteroid belt and threatening aliens. With so much uncertainty about the aliens' capabilities and intentions, analyzing the captured computer equipment in Gallant's possession could prove crucial. The fate of Earth could rest on the abilities of Midshipman Henry Gallant. Unfortunately, it is his abilities that have been much in doubt during his tour of duty.

In an era of genetic engineering, he is the only Natural (non-genetically enhanced) officer left in the fleet. His classmates and superior officers have all expressed their concern that he will not be up to the demands of the space service.

Only bright and attractive junior officer Kelsey Mitchel has shown any sympathy for him. Now as his navigator on the last fighter in squadron 111, her life as well as a good many others, depends of Henry Gallant.

BOOK 2
In an era of genetic engineering, Lieutenant Henry Gallant is the only Natural (non-genetically enhanced) officer left in the fleet. In spite of his superiors' concerns that he is not up to the challenge, his unique mental abilities have proven essential to the defense of the United Planets in its fight against the Titan invaders.

Serving on the first FTL prototype, the Intrepid, on its maiden voyage to Tau-Ceti, Gallant finds a lost human colony on the planet Elysium. Elysium's leader, Cyrus Wolfe, has allied himself with an ancient Artificial Intelligence which had lain dormant on the planet for millennia, but is now willing to protect the colonists against the Titans.

Gallant allies himself with Alaina Hepburn, the leader of the democratic opposition. With Alaina's help, he discovers that the ancient AI has a sinister ulterior motive and he must match his exceptional mind against the complexity of machine intelligence to escape the ultimate trap and prevent the extermination of humanity.

BOOK 3
In the 22th Century, the people of the Solar System have banded together against an alien invasion. Unfortunately, they're losing—badly.

As the only Natural remaining in the genetically engineered officer corps of the United Planet's fleet, Henry Gallant has unique mental abilities that have proven essential to the defense against the Titan invaders. Nevertheless his fellow officers lack faith in him, and worse, he has angered prominent men by speaking truth to power. Despite this, Admiral Collingsworth has given him command of the Warrior, the most advanced stealth warship in the UP arsenal and ordered him to the alien's main base to spy, intrigue, and disrupt their war capacity.

Gallant's mission leads to risky battles and painful choices, but no choice is more personal, or intimate, than the choice to face your own death. And for Henry Gallant—a flawed young man, in a hopeless situation, against overwhelming odds—a dreadful decision looms before him.

He has only one saving grace—he is unafraid.

BOOK 4
Henry Gallant thought Alaina loved him, but now she's found someone else. A tidal wave of loss and grief swept over him, leaving him undecided about what to do next, or how to move forward.

Despite his sorrow, he goes on a dangerous mission to an invading aliens' home world in the Gliese-581 star system. There he uses a neural interface to penetrate their communication network and steal a high ranking alien's identity. Through this artifice he learns about their history and society, and discovers a way to hinder and possibly defeat them.

A side-effect of linking into the alien network—which was created for autistic savants—is that Gallant's mind is stimulated and enhanced to the point where he begins to experience superintelligence abilities.

While he struggles to fend off those who doubt his loyalty he strives to win back Alaina.