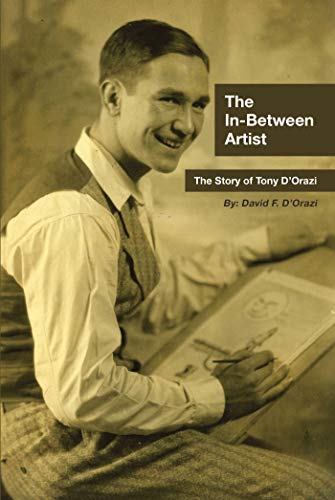 The In-Between Artist: The Story of Tony D’Orazi

A biography of Tony D'Orazi, an artist and entertainer, a dedicated husband and father of four - afflicted with schizophrenia.
Ultimately, his story proves that no matter what obstacles one faces, art always finds a way.

The successes and struggles of influential twentieth century artist Tony D’Orazi are detailed in this first-ever biography, The In-Between Artist: The Story of Tony D’Orazi, from his early years as a child prodigy in Missoula, Montana, to his ascension into an award-winning artist by way of New York City and Chicago and his days working for Disney to ultimately becoming the radio and television personality known as Uncle Tony O’Dare, “the first cartoonist of the air.” Tony’s personal struggles would repeatedly attempt to derail his artistic ambitions, but the art would always find a way to persevere.

Along his ascent, he would also meet his true love, whom he formed a vaudeville act with, which found them entertaining crowds across America. From there, he became a husband and father of four, who constantly struggled to find balance between his roles as a visual artist and family man, all while battling with severe bouts of mental illness.

This is a portrait of an artist and entertainer which also includes later chapters of his life, in which he went on to become a successful salesman and character actor, all while still pursuing his need to create. In the end, despite all these roles he played and the countless hurdles he faced, Tony remained an artist in between. Ultimately, his story proves that no matter what obstacles he faced, his art always found a way.