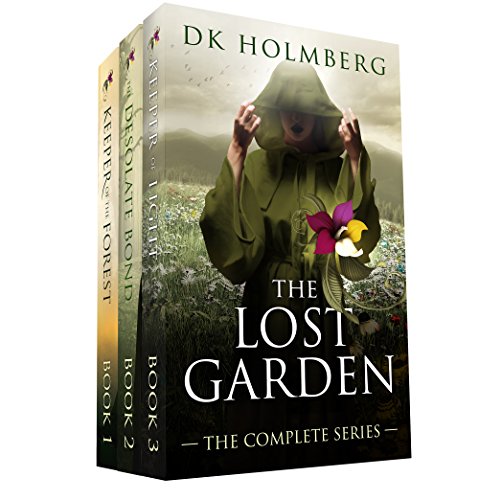 The Lost Garden: The Complete Series

Eris must discover the magic of flowers before all is lost.
Eris Taeresin, third daughter to the king, has searched the massive palace garden for a flower that will let her learn the secret language of flowers. Each day the Mistress of Flowers finds some reason to refuse, all while her sisters found theirs easily.

Eris must discover the magic of flowers before all is lost.

Keeper of the Forest (book 1)

Eris Taeresin, third daughter to the king, has searched the massive palace garden for a flower that will let her learn the secret language of flowers. Each day the Mistress of Flowers finds some reason to refuse, all while her sisters found theirs easily.

When Eris finds a strange flower and meets Terran, a handsome young gardener, she discovers the Mistress of Flowers might be a flower mage who intends to use the garden in a plot against the kingdom. Eris soon learns the threat against the kingdom is deeper than she suspected. She might be the only one able to save it from destruction, if only she can learn to use her own magic in time.

Newly named keeper of the forest, Eris Taeresin struggles to understand what her new role - and new powers - mean for her. A keeper can use the energy stored within the forest, can learn from ancient lessons woven into deeply buried roots, but Eris doesn't fully control it. As she fails to use that power, she begins to wonder if she really is a keeper of trees. With the Conclave of Magi attacking along the southern border, Eris must learn the key to her abilities or everything she knows will be lost.

To help, she decides to return home to learn from the Lira, the Mistress of Flowers, knowing it will put a strain on her growing relationship with Terran. There she discovers her mother is dying and Lira cannot save her. As Eris works to learn whether her connection to the forest can save her mother, she discovers a mysterious message hidden in flowers around the palace. Before she can decipher its meaning, she is betrayed and taken from the palace.

Eris must discover the key to her abilities in order to save herself, help her mother, stop the magi, all without losing Terran, but can she do so in time?

Eris must rebuild the lost Gardens of Elaysia to stop the coming darkness, but doing so risks the life she desperately wants with Terran.

In the aftermath of the recent attack, Eris wants nothing but peace and the chance to enjoy her life with Terran as she learns what it means to be a keeper of both trees and flowers. But when she finds a message with a strange and powerful flower, she learns a threat greater than the magi has reappeared.

Understanding this threat takes her on another quest, this time to convince the only remaining keeper of trees to teach her. She travels to the one place her magic cannot, dragging Terran and her mysterious guardian Shadow with her. If she fails, much more than her life will be lost, but all of Light will be lost.