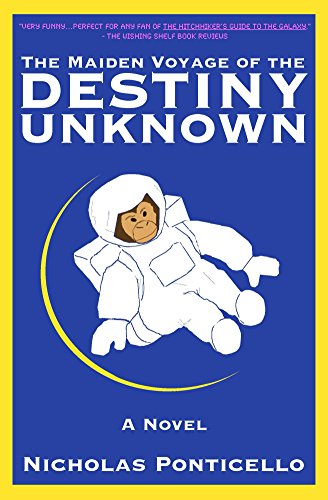 The Maiden Voyage Of The Destiny Unknown

What happens when fifty people are stranded in space for fifty years? Total mayhem! Take a ride with Marcus Fincus and his crew on this hilarious romp through space and time.

It is two hundred million years into the future, and Earth is devastated by a dying sun whose expanding photosphere has melted the surface of the planet and driven humans underground. In this world, humankind is doomed to extinction. But Marcus Fincus thinks he can secure the survival of the human species. He selects a small crew of brave voyagers from the insignificant but determined planet Earth to set out in search of a new home.

Their ship, the Destiny Unknown, is designed to take care of everything. Every meal is regulated to the ounce. Every mile is charted and mapped. Everybody has his or her own unique role in this microsociety: doctor, teacher, electrician, engineer. Then the inevitable happens: the passengers start to behave as people. The captain seduces half the women on the ship, his wife develops a neurological disorder, their sixteen-year-old son runs away in the escape pod, and the doctor dies in a freak scalpel accident.

The Maiden Voyage of the Destiny Unknown is a dark parable about the nature of human existence. Told from the perspective of an alien observer who follows our heroes like an unsympathetic reporter from National Geographic—he refuses to intervene when our heroes come face-to-face with deadly meteor showers, alien cannibals, and other crises that threaten to destroy them all. Funny and philosophical in its treatment of human nature,

The Maiden Voyage of the Destiny Unknown not only seeks to understand the place of humans in the universe—it also seeks to address the looming question: What makes us so special?