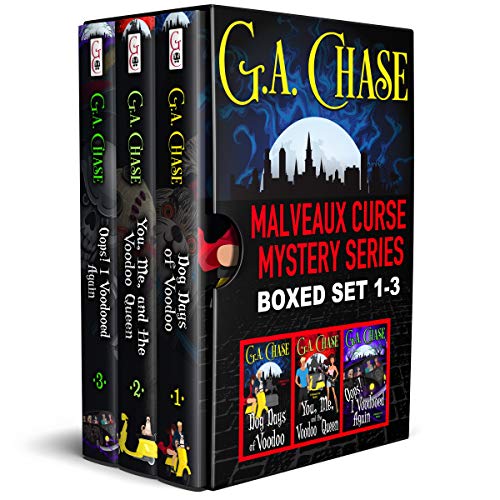 Follow the epic paranormal adventures of Kendell, Myles and Cheesecake through the first three books of the Malveaux Curse Mystery Series. Titles include: Dog Days of Voodoo, You, Me, and the Voodoo Queen, and Ooops! I Voodooed Again.

Included are the first three books in the Malveaux Mystery series.

Dog Days of Voodoo:
Absolutely nothing stands between a woman and her beloved dog… not even the malevolent force of a voodoo curse.
Kendell Summer, lead guitarist for Polly Urethane and the Strippers, has always been interested in the unexplained. So when she sets off on a paranormal research romp with Myles, a former classmate, to explore his skills in psychometry, she's ready for a little adventure. But she gets more than she bargained for when her Lhasa apso, Cheesecake, is dognapped. Kendell will do whatever it takes to get her dog back.
While rescuing the pup, Kendell and Myles learn that the touristy glitz of New Orleans' voodoo shops hides a dark history few understand—a truth that some in the city plan to use for their own gain.
Soon they uncover more than they ever wanted to know about New Orleans' unsavory past and a curse that threatens to change everything. Only Kendell can prevent the evil they've uncovered from doing more damage, but she'll need Myles's support and psychometric abilities—and the vigilance of the ever-watchful Cheesecake.

You, Me, and the Voodoo Queen:
Kendell Summer just can't catch a break. All she wants is one good passionate kiss from her paranormal partner, Myles, but in the midst of their embrace, she hears a distress message coming from a passing paddle wheeler. Her band, Polly Urethane and the Strippers, is in trouble. Once again, she must drop everything and rush to the rescue while relying on Myles to have her back.
Unfortunately, the events that unfold while she's saving her friends only plunge her deeper into the dreaded Malveaux curse and threaten Myles with a fate worse than death.

Oops! I Voodooed Again:
Kendell will need everyone she trusts, including her loyal dog, Cheesecake, to help her save his soul.
Every time Kendell Summer thinks she has finally apprehended her ancestor, Baron Malveaux, the dastardly spirit slips from her grasp. His being freed from the voodoo totem to rejoin the living creates unprecedented dangers—too many for Kendell to face alone, causing her to turn to her newly discovered Wiccan counterpart, Sanguine Delarosa, for help.
Sanguine, however, comes with her own challenges. Acting more like a bratty younger sister than an accomplished swamp witch, Sanguine has her own secret agenda. And once again Kendell, her boyfriend, and her faithful pooch, Cheesecake, end up in harm's way while fighting for humanity's greater good.
But Sanguine is the key—if there is any hope of preventing a war between the living and the dead, Kendell and Sanguine must find a way to trust each other and work together.