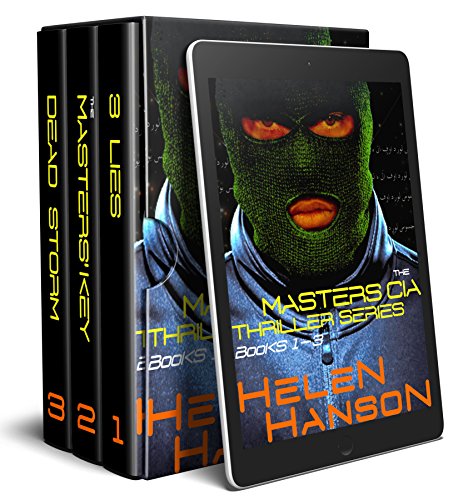 Follow Clint Masters as he tries to track kidnappers, protect the city of Boston from ruin, and keep himself sober long enough to help the president.

THE MASTERS CIA THRILLER SERIES includes 3 LIES, THE MASTERS’ KEY, and DEAD STORM. Follow Clint Masters as he tries to track kidnappers, protect the city of Boston from ruin, and keep himself sober long enough to help the president.

3 LIES - Book 1:
Can kidnapping a sick woman alter the course of a nation?

After stepping off the corporate treadmill, Clint finds love to last a lifetime in Beth, who is recovering from kidney failure. When she blows off their date and misses her dialysis session, Clint suspects she's been kidnapped. In spite of the mounting evidence, her family refuses to call the police. They have their reasons, but without routine dialysis, Beth won't survive.

While Clint pursues every lead to find her. Beth's dilemma draws the attention of spy trackers at the CIA investigating a computer system breach. Someone launched an unauthorized mission. Was it terrorists? Or someone more sinister . . .

Clint must find Beth before her kidneys fail or her abductors pervert the justice of a nation.

THE MASTERS' KEY- Book 2:
With Boston under fire, only Clint Masters can stop the madness. But the city blames him for every disaster.

With his allies at the CIA, Clint battles a mysterious new threat targeting his company and the citizens of Boston, who now live in fear. Under a gag order from his last confrontation, Clint can't reveal the truth about the tragedies.

In spite of city-wide panic, he sees the terror attacks as personal. And he learns that not everyone at the CIA wants to catch the killer. With public suspicion at redline, Clint must go on the run to survive.

Can he capture the elusive and ruthless maniac before his city burns? Or will Clint become the next victim?

DEAD STORM- Book 3:
Hackers can steal your money, control your car, access your secret files. What if one had a grip on your beating heart?

Whatever. Clint's got his own problems. With his company in chaos, only a bottle of scotch tempers his misery. But his apathy will cost others their lives. A plea from the President of the United States doesn't shake his despondence. Not even an ultimatum from Beth. But the Washington elite won't let Clint rest until they get answers.

Will Clint rise above his mounting despair and help the CIA catch a cyber killer?