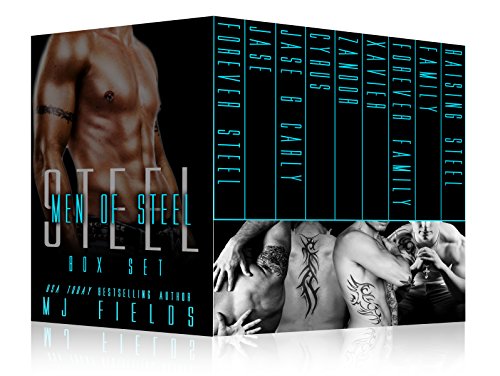 The Men Of Steel Anthology

Tattooed, pierced, alpha, New Jersey brothers Jase, Cyrus, Zandor, and Xavier Steel work side by side at their families tattoo shop Forever Steel. These sexy and confident young men vow to never fall in love. They show no restraint when it comes to living life the way they want, and enjoy the simple pleasures in abundance.

These sexy and confident young men vow to never fall in love. They show no restraint when it comes to living life the way they want, and enjoy the simple pleasures in abundance. They have an unbreakable family bond and stand by each other through thick and thin. Forever Steel, baby.

Meet Jase Steel, a twenty-two-year-old hot-as-hell, tattooed, and pierced bad boy, who doesn't care what you or anyone else things of him.

But Jase's wild ways and "who gives a f" attitude is about to change. He can't seem to get the beautifully innocent, blonde college girl out of his head. So what she's the cousin of a friend who does not approve? Jase has never exercised self-control when it came to getting a woman, and he wasn't going to start now.

After tricking Carly into "fake dating," it turns out the joke's on him, as Jase falls hard and fast for her. But as painful secrets from his past come to light, Jase will have to man up and bare it all to Carly, even if the ugly truth could tare them apart forever.

Meet Cyrus, the oldest of the Steel brothers. He's strong, independent, and damaged. But don't feel sorry for him, Cyrus likes his life just the way it is. No rules, no commitments, and no more than 3 times with the same woman.

Until Tara.
A child of the foster care system who can't remember ever being loved or feeling safe, Tara brings out the protective alpha male in Cyrus. And as much as he hates to admit it, something else. Something he wishes he didn't feel. Something that could weaken his resolve.

As they spend more time together, Cyrus's three-times-only-with-no-strings rule disintegrates. But Cyrus hates being vulnerable. He hates feeling weak. And so he does what any red-blooded man afraid of commitment does, he lets Tara slip through his fingers, rather than let her all the way in.

But with him, Tara is a fighter, and she's not about to give up.

Meet Zandor Steel. He's spent the past year in Italy acting out just about every sexual fantasy he could dream up. But it wasn't all fun and games. Zandor was there to oversee construction on a posh casino resort playground for the rich and famous.

But rumors of trouble with this brothers has him worried, and Zandor heads home to help out. It's the least he can do.

Jase and Cyrus had been Zandor's mentors. When it came to women, they taught him to avoid attachments and to know the difference between lust and love. So when word of at least one of his brothers being ready to settle down arrives, Zandor hopes he can talk some sense into him before it's too late.

Until he runs smack into resistance.

Southern Bell, Bekah George may just be the match Zandor has been looking for in the bedroom. She's neither intimidated by, nor afraid of his preferences. But as he starts to let his guard down, and consider the possibility of there being more to life than mind-blowing, non-committal sex, Bekah reveals a side of herself Zandor doesn't want to see.

Was he right to avoid entanglements, or has he already fallen to hard to let her go?

Meet Xavier Steel
Twenty -three-year- old Xavier Steel is his own man, despite what his brothers and Momma Joe think. He turns away from the family business and heads to New Jersey to start a production company. Xavier plans to follow his true life's passion and make a living playing and creating music.

Taelyn Patrick takes a grueling job in order to make extra money to help her fiancé Daniel through medical school. Besides, how hard can it be to help a spoiled rich kid throw his money down the drain?