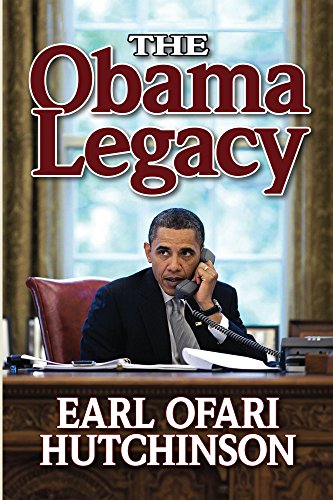 In The Obama Legacy, Hutchinson sets the battles he waged against the context of the turbulent events of the day. The Obama Legacy is a full-throated assessment of the big-ticket issues that marked his years in office and presents as well selections from his signature speeches.

Cancel every unconstitutional executive action, memorandum and order issued by President Obama. President elect Donald Trump was blunt when he announced that rescinding Obama's executive orders would be his first order of business in his first 100 days in the White House. Will that really happen, and if so what does that mean for the Obama legacy? In The Obama Legacy, author and political analyst Earl Ofari Hutchinson makes a deep, balanced, and wide ranging probe into the programs, policies and initiatives of President Obama during his eight year White House tenure.

Hutchinson notes, "The instant that he tossed his hat in the presidential rink in February, 2007, the triple mantra was that he could be the first black to be president. This would be convincing proof that America had finally kicked its race syndrome. And he could cement a governing White House legacy that could be a shining model for future generations to emulate.
This triple mantra was repeated ad infinitum. It was right and wrong about the racial implication of his election.'

Obama's White House win, says Hutchinson, was about far more than attaining the historic first of being the first African-American to win the presidency. He had to prove that a freshly minted US Senator, relatively new on the national political scene, and with untested administrative skills, could withstand the volcanic pressures and opposition that he'd face.

To make it work, and be that shining model of success, he had to cling closely to the centrist blueprint former President Bill Clinton laid out for Democrats in the 1990s to win elections, and to govern after they won office.

It meant that he had to emphasize strong defense, prosecute a vigorous war against terrorism, wind down the Iraq War, push for mild tax reform for the middle-class, and a workable plan for affordable health care and advocate tougher regulations to rein in Wall Street, back comprehensive gun control legislation, jumpstart climate control measures, put the obligatory Democratic Party stress on strengthening LGBT, women's and civil rights, and make moderate and balanced Supreme Court picks and administration posts.

He walked the narrowest of tightropes in this balancing act. Every step of the way he faced a GOP that made it clear its primary goal was to make him a one term president, and failing that cripple his presidency by blocking his proposed initiatives and legislation.

The issues and problems were towering, a monumental fiscal crisis, wars in Iraq and Afghanistan, the Guantanamo prison, gun related massacres, gun control, a health care crisis, the war on terrorism, climate control, police violence, civil rights, abortion, immigration reform, same-sex marriage, and the Clinton email scandals. These issues sparked fierce battles and opposition from the GOP as well as progressives, and even some Latino and African-American advocacy groups and a myriad of other competing interest groups.

Hutchinson assesses Obama's performance on each of these issues and more in The Obama Legacy. He sets the battles he waged against the context of the turbulent events of the day. "The Obama White House was a historic and symbolic first. But it was also a White House that kept a firm, cautious and conciliatory eye on mid-America public opinion, and corporate and defense industry interests in making policy decisions and determining priorities,"

Hutchinson insists, "Obama would and could not have attained the White House if he hadn't done the same. This had nothing to do with race, or attaining the historic first of being the nation's first black president. It had everything to do with the requirement of White House governance."

The Obama Legacy is a full-throated assessment of the big-ticket issues that marked his years in office and presents as well selections from his signature speeches.