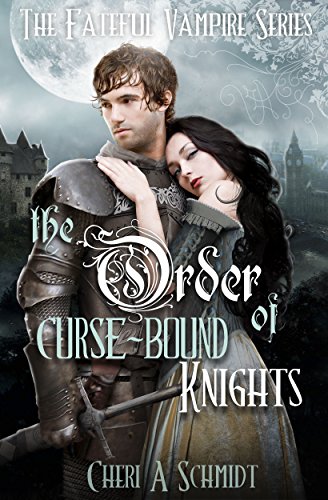 The Order of Curse-Bound Knights

Instead of dying, Sir Max is saved by a curse—a curse that turns him into a vampire. Then he is tasked to watch over and protect his rescuer’s mortal daughter, Nadia. But Nadia puts Max’s skills as a knight to the test, captures his heart, and bewitches him...

He is saved by a curse. That curse makes him even more dangerous...and he likes it. To him, a new life as a vampire is an appealing thing.

The man who turned him into this great, fearsome warrior tasks him to watch over and protect his mortal daughter, Nadia. But the beautiful Nadia puts Max's skills as a knight to the test, captures his heart, and bewitches him with eyes of emerald green. A power more potent than any magical curse.

Inspired by ballads of Robin Hood, Nadia is a bit too rebellious for her own good. And with a kind heart, she is much too trusting and forgiving for Max's peace of mind, because those attributes get her into a great deal of peril. Deadly creatures surround her—some of them are there to protect her and some want to lure her into a trap—and she has no idea...

But can a knight in shining armor heal a lady's heart when her love for the legend of Robin Hood is used against her?