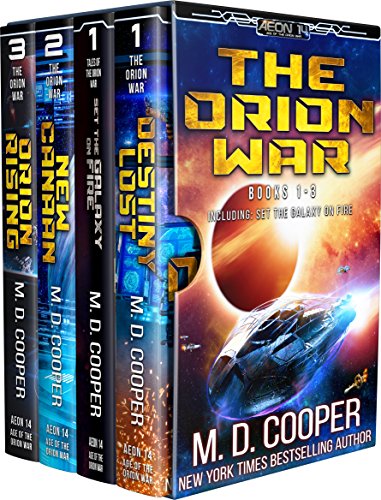 In the distant future, one ship's appearance will set the galaxy on a course for war.
An ancient general and a freighter captain must join forces and defeat all challengers if they are to reach the Intrepid in time to save it from the enemies gathering at Bollam's World.

In the distant future, one ship's appearance will set the galaxy on a course for war.

Note: Though the Intrepid Saga omnibus also contained Destiny Lost, this collection contains Set the Galaxy on Fire to offset this duplication

An ancient general and a freighter captain must join forces and defeat all challengers if they are to reach the Intrepid in time to save it from the enemies gathering at Bollam's World.

Tanis Richards has spent half her life on the Intrepid, guiding the great colony ship, and its two million passengers, across hundreds of light-years. She has risked life, limb and those dearest to her to get this far.

Now she's within reach of her goal; the New Canaan System, and a normal, stable life. The kind she's only dreamed about. The only remaining hurdle is to strike a deal with the Transcend Interstellar Alliance and trade the Intrepid's advanced technology for the star system.

If only things were so easy.

The Intrepid's arrival has upset the delicate balance of power between the Transcend, the Orion Guard, and the Inner Stars. Everything Tanis has ever hoped for is at risk as she fights to build the colony of New Canaan amidst the looming specter of war.

After centuries of struggle, the ISF Intrepid has finally brought its colonists to New Canaan, a star system better than any they imagined. They made landfall and began to build their new home, far from the troubles of Sol and the Inner Stars.

Yet no one in the Orion Arm has forgotten that the colonists possess the most valuable technology known to humankind, least of all Tanis Richards—as she secretly prepares to defend New Canaan against any and all aggressors.

Now things have come to a head. A Transcend fleet has invaded New Canaan, and a Hegemony of Worlds fleet on its way. Tanis Richards must defeat a rogue AI that has its own designs for humanity's future, while saving her people from invaders.

General, governor, commander of twenty thousand warships, Tanis Richards stands on the edge of a precipice. If she jumps, she will draw all of humanity into total war.