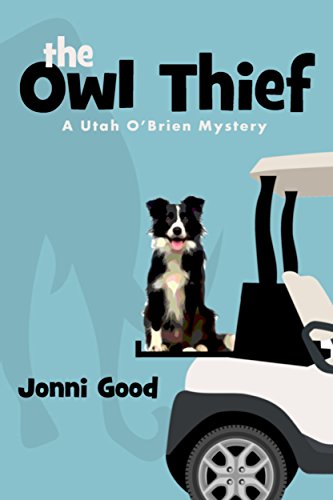 A murder victim has just been discovered at City Hall, and the dead guy is wearing one of Utah O'Brien's hand-made masks. To clear her name and regain her reputation, Utah and her friends must unmask the real killer. Can they do it before anyone else gets killed?

Secrets, blackmail and murder in a small Midwestern town ...

A murder victim has been discovered at City Hall, and the dead guy is wearing one of Utah O'Brien's hand-made masks. The victim won't be missed, even by his wife. In fact, some people even crack a few jokes about the crime, because of that mask—but it's no laughing matter to Utah.

She came home to West Elmer, MN, twenty-two years ago, seeking refuge and solace after her own husband was murdered in the city. While living in this isolated small town, she managed to build a national reputation as a sculptor, first as the owner of a natural history museum, and then with her website and online craft store.

Now, a local TV reporter brings up her husband's murder, claiming that Utah was a prime suspect in that past investigation, too—and the reports go viral. Utah watches her whole world unravel on prime time TV and all over the Internet.

The timing for this crisis couldn't be worse. There's an election coming up in three days. Utah is running in that election, and she expected to win. The scene of the murder couldn't be worse, either—only six people have a key to City Hall, and Utah happens to be one of them.

The sheriff is out of town for a few days on a more important case. If she's going to clear her name, regain her reputation and, hopefully, win that election, Utah and her friends must try to unmask the real killer before the voting starts-and before anyone else gets killed.