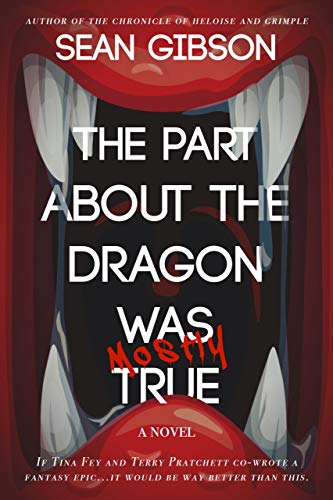 The Part About the Dragon Was (Mostly) True

Monty Python meets 30 Rock as the (self-proclaimed) legendary bard Heloise tells the story behind the story of the famous group of adventurers who slayed the might red dragon Dragonia. Turns out adventuring is a lot messier, less heroic, and stinky than the tales might lead you to believe...

Sure, you think you know the story of the fearsome red dragon, Dragonia. How it terrorized the village of Skendrick until a brave band of heroes answered the noble villagers' call for aid. How nothing could stop those courageous souls from facing down the dragon. How they emerged victorious and laden with treasure.

But, even in a world filled with epic adventures and tales of derring-do, where dragons, goblins, and unlicensed prestidigitators run amok, legendary heroes don't always know what they're doing. Sometimes they're clueless. Sometimes beleaguered townsfolk are more hapless than helpless. And orcs? They're not always assholes, and sometimes they don't actually want to eat your children. Heloise the Bard, Erithea's most renowned storyteller (at least, to hear her tell it), is here to set the record straight.

See, it turns out adventuring isn't easy, and true heroism is as rare as an articulate villager. Having spent decades propagating this particular myth (which, incidentally, she wrote), she's finally able to tell the real story-for which she just so happened to have a front-row seat.

Welcome to Erithea. I hope you brought a change of undergarments-things are going to get messy.