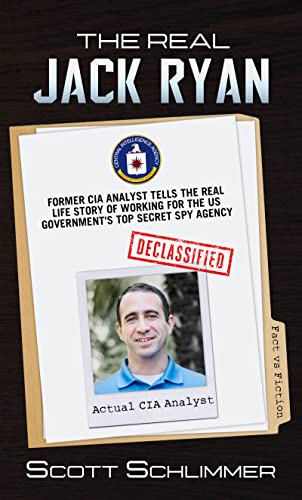 Hear the real-life story of the popular fictional CIA Analyst.
Have you wondered what it’s really like behind the walls at CIA's mysterious headquarters in Langley Virginia? Learn about the real CIA.
Everything in this book is 100% true. The CIA made only minor redactions.

Hear the real-life story of the popular fictional CIA Analyst.
Everything in this book is 100% true. The CIA made only minor redactions.

What’s it really like behind the walls at CIA's mysterious headquarters in Langley Virginia? Learn about the real CIA, in this book.

Would you like to sit and have coffee with a CIA officer and pick their brain? This book is a similar experience. It is a collection of 52 short stories, centered around the questions that most people ask me when they find out that I am former CIA.

This book is designed to be easy-to-read and accessible to all. It is a relatively quick read with short, digestible stories focused on my personal CIA story and the reality of the CIA, in contrast to what we see in the movies.

Would you like to see the unexpected road sign telling you where CIA headquarters is located? Or an example of a classified CIA cable? Some interesting and illustrative photos like these have also been included.

Have you ever dreamed of working at the CIA? This book also gives advice on how to get a job at the CIA.

⚠ The CIA “does not object to this book.”
That’s the CIA’s equivalent of “Two Thumbs Up” from Siskel & Ebert, right?!
(Author’s note: To make sure I don’t end up in jail, I should clarify that no, it isn’t. The CIA and the US Government did not endorse this book, in any way. Their only contribution was to insist on deletions!)

Excerpt: ◆ "I bit into a hamburger. Grease dripped onto a sheet of paper. This was no ordinary piece of paper. It was TOP SECRET. This was my first time seeing a TOP SECRET document, which should have been a momentous occasion. But we were in the middle of a crisis simulation, and there’s no time for a lunch break during a crisis! So, my first TOP SECRET document doubled as a grease napkin. This combination of state secrets and burger grease perfectly summarizes my experience as a CIA analyst. As The Real Jack Ryan." ◆

Want to hear the real story?