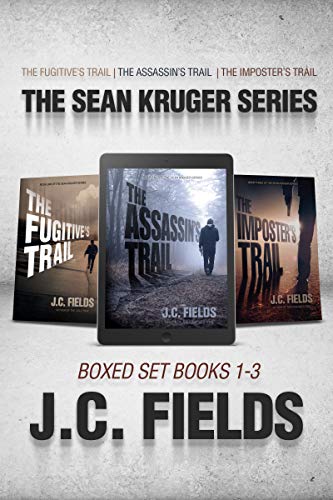 The first three novels in Sean Kruger Series, The Fugitive’s Trail, The Assassin’s Trail, and The Imposter’s Trail, are unabridged and ready for your enjoyment.

Three Thrilling Sean Kruger Novels In One Box Set!
THE FUGITIVE'S TRAIL
In the lobby of a prestigious Wall Street investment firm, one man is dead and another seriously injured. The man accused of the crime is now a fugitive. When the Director of the FBI personally orders Special Agent Sean Kruger to New York City to find the fugitive, Kruger questions the reason. Told to shut up and do his job, he starts looking into the case. What he finds is troubling. Eye-witness accounts seem contrived with little variance between individual testimonies. The more he hears, the more he feels someone is manipulating the story.

The fugitive is a ghost. A ghost who has disappeared.

THE ASSASSIN'S TRAIL
A serial killer is on the loose in the Washington, DC area. Two men are dead and the FBI has called in Profiler Special Agent Sean Kruger. Now in the twilight of his career, Kruger and longtime girlfriend, Stephanie, have decided to marry. Tired of the bureaucracy and politics of the job, he wants no part of the investigation.

But when the assassin strikes close to home, it becomes personal and he turns to JR Diminski, the computer genius from The Fugitive's Trail, for help. To protect his new marriage he will put his life in danger as he pursues the assassin. An assassin whose ultimate goal is an attack in the center of the United States. An attack that could result in more civilian casualties than 9/11.

Now a college professor, Kruger has tried to live with the mistake he made while investigating Bishop six years earlier. It looks as though the only man to elude him, in his twenty-five-year tenure with the FBI, has returned to seek vengeance on those who forced the man to flee the country. With his family in danger, Kruger comes out of retirement to find Bishop’s trail. A trail that leads Sean to question his own humanity.