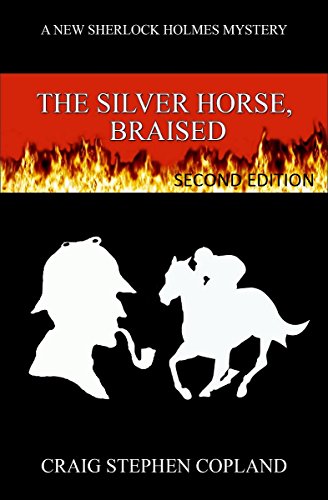 A fortune has been wagered on the horse race of the century. A strange group of Americans. When a famous jockey is mysteriously killed while practicing on one of the favorites, Sherlock Holmes is called in. This new mystery will appeal not only to those who love Sherlock Holmes, but also to those who enjoy the lovable characters of the stories of Damon Runyan.
.

THE SILVER HORSE, BRAISED.
A FORTUNE HAS BEEN WAGERED ON THE HORSE RACE. A JOCKEY MYSTERIOUSLY DIES. A STRANGE GROUP OF AMERICANS APPEAR.

The greatest horse race of the century, with the best five-year-olds of England running against the best of America, will take place in a week at Epsom Downs. Millions have been bet on the winners. Owners, jockeys, grooms, and gamblers from across England arrive. So too do a host of colorful characters from the racetracks of America. Rumors of false statistics, threats, bribes, the administering of opiates to horse or rider, immoral seductions, abductions, and even murders are abounding. Scotland Yard is concerned.

When a famous jockey is mysteriously killed while practicing on one of the favorites, Sherlock Holmes is called in. Before the race, everything appears to be in order. The race is run and an incredible white horse emerges as the winner by over twenty-five lengths. Celebrations are in order and good times are had. And that night disaster strikes. More deaths, of both men and beasts, take place. Holmes identifies several suspects and then, to his great disappointment and frustration, he fails to prove that any of them committed the crime.

Until … This completely original mystery is a tribute to the original Sherlock Holmes story, Silver Blaze. It also borrows from the great racetrack stories of Damon Runyon. Fans of both of these wonderful writers will enjoy seeing Holmes, Watson, and Lestrade – assisted by Harry the Horse, Little Miss Marker, Sorrowful, and the nameless narrator – as they finally bring the culprits to justice.