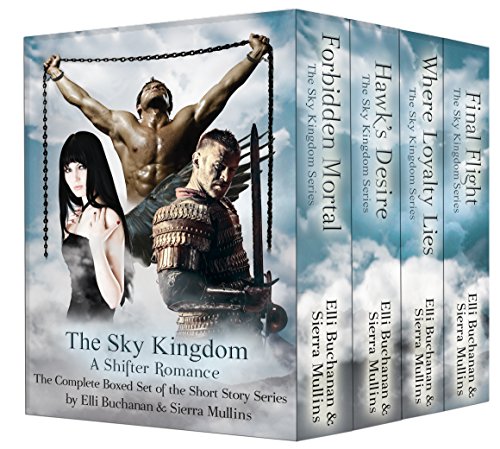 This is the just released Boxed Set Edition of The Sky Kingdom short story series. A Shifter Romance.
The enmity between the Eagle Convocation, the Hawk Cast and the Owl Parliament has governed the sky civilizations for hundreds of years. During their lifetime, the rulers of the Convocation and the Cast had formed an uneasy alliance.

The enmity between the Eagle Convocation, the Hawk Cast and the Owl Parliament has governed the sky civilizations for hundreds of years. During their lifetime, the rulers of the Convocation and the Cast had formed an uneasy alliance. To join their offspring in marriage would unite the two powerful nations and give them the strength to defeat and enslave the mighty Owl Parliament ruled by the blood-thirsty Caradas family.

Lady Hawk Salima Isolde fought against this union as did Egypt Volker, the son and now ruler of the Eagle Convocation. As children, they played as companions, yet neither would be forced into a marriage not of their choosing. On the death of her father, Salima rules the Hawk Cast with a more benevolent hand, yet the threat of war is always on the horizon. The bird shape-shifters are a species born of blood-lust. The battle, the kill and the prey is part of what they are, yet Salima fought this side of herself. The blood-letting sickened her and the ever-present threat of war and enslavement of her people was a constant distress.

She knew of the folk-lore. There was a way to end the existence of the shape-shifting creatures of the sky. No more fighting, no more fear of being enslaved by another shape-shifting avifauna order. All it would take is one human—just one, to stop Parliament, the nation of shape-shifting owls from enslaving the Convocation and the Cast, condemning them to be bondsmen for as long as time should endure and for Salima to be free of the confines of remaining a hawk-woman forever.

An unlikely and initially dangerous encounter with a human in the forest opens the door for Salima to put her plans into motion. However, what she does not bargain for is the affect that Rolfe Cedric, a mere human will have on her sensibilities.

Can Salima follow through with her plan to use Rolfe to end the threat of the Cast's enslavement by the Owl Parliament and at the same time free herself from her own personal captivity, or will she spare the man who has evoked feelings in her she was unprepared for and unable to fight against?