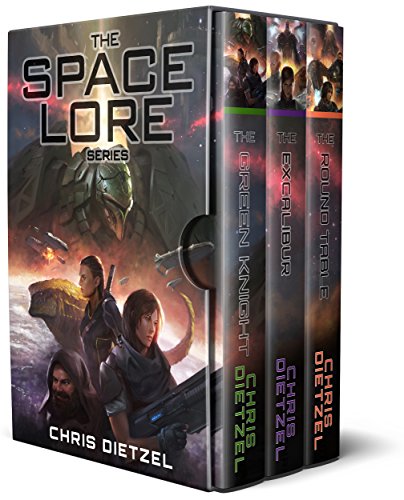 For the first time, all three Space Lore books are included in one volume. Each will transport you to a world that combines mythology with Sci Fi action and adventure.

The Green Knight - Space Lore I - Near the border between two kingdoms, a vessel full of innocent passengers is destroyed. While the extent of the impending retaliation is unknown, its inevitability is not. Galactic war is approaching. In a seedy bar in a distant corner of the solar system, a knight clad entirely in green armor puts forth a grisly challenge. The only person to accept the knight's game is a woman who spends her time drinking and thieving. These two acts, occurring in different parts of the galaxy, both lead to the same spot: the planet that will soon fall under attack.

The Excalibur - Space Lore II - Six years ago, two fleets met in a battle that changed the course of the galaxy. In the time since, the CasterLan Kingdom and the Vonnegan Empire have been rebuilding their forces. The clock is ticking down to another inevitable confrontation. In the face of insurmountable odds, Vere CasterLan's only hope lies in freeing a legendary weapon from the stone that encases it. It has been said that whoever can free the Excalibur will possess unimaginable power. The only problem, as certain death approaches, is that for thousands of years no one has been able to figure out how to release the Excalibur from the asteroid surrounding it.

The Round Table - Space Lore III - The CasterLan forces have withdrawn to the edges of the solar system. Vere CasterLan, their leader, struggles to survive in the galaxy's most feared prison. Meanwhile, the Vonnegan Empire looks to find more planets to rule over. Seeing firsthand the cruelty and suffering that the Vonnegan Empire is capable of, Vere begins to understand that only one thing that can bring peace to the galaxy and stop Mowbray Vonnegan once and for all. It's a simple notion, only three words: the Round Table. But as the call goes out for armies from every corner of space to unite against a common evil, will anyone listen to a ruler who has already lost everything she once had?