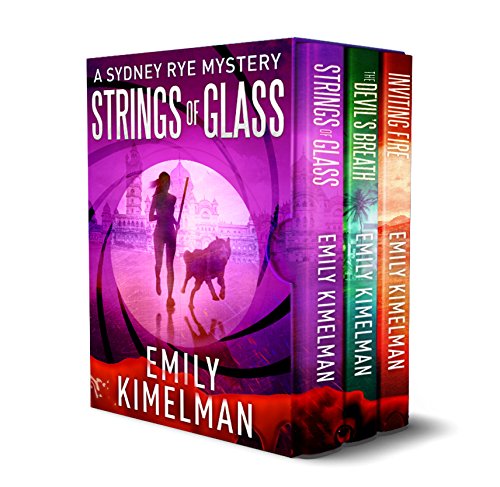 One young woman's journey from a dog walker on the Upper East Side of Manhattan to an international fugitive, fighting for justice around the globe, with her loyal dog, Blue, by her side.

One young woman's journey from a dog walker on the Upper East Side of Manhattan to an international fugitive, fighting for justice around the globe, with her loyal dog, Blue, by her side.

STRINGS OF GLASS (Sydney Rye, #4)
Trouble finds Rye when she stops the attempted rape and murder of Anita, a reporter working on a story of corruption and child trafficking. The atrocities Anita describes send Sydney and Blue on a quest that takes them across India after a dangerous and, up until now, untouchable, figure.

THE DEVIL'S BREATH (Sydney Rye, #5)
One of Sydney Rye's dearest friends, Hugh Defry, has been accused of brutally murder. All the evidence points to Hugh and he has no memory of that night. But Sydney refuses to believe that Hugh is capable of such violence. Sydney flies to Miami searching for the real murderer unprepared for the realization that her personal fight for justice has become much more than she'd ever imagined. Sydney is pushed towards making a decision that will change not just her life, but possibly the future of crime fighting.

INVITING FIRE (Sydney Rye, #6)
Recovering from a near fatal attack that has left her with residual trauma, including haunting dreams and flashbacks, Sydney Rye is regaining her strength at the jungle training camp of Joyful Justice, the vigilante network inspired by her now legendary acts of vengeance. However, when she runs up against an old adversary he destroys the peace she has found putting her and Blue's lives in danger.