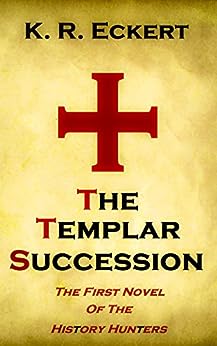 Kidnapping, murder, fanatical enemies, and a shadowy Freemason known only as The Bookkeeper are among the hurdles The History Hunters must overcome in their global adventure to find the legendary Treasure of the Knights Templar.

Forty years later, spurred on by the discovery of a long lost manuscript, the Professor’s son hires historians Paul Davenport and Sara Walsh to pick up where his father left off.

Their adventure leads them from Benjamin Franklin’s Freemasons to the early days of the Civil War, from World War II Paris to the corrupt world of J. Edgar Hoover’s FBI.

But Davenport and Walsh aren’t alone in their search. A fanatical group of Neo-Knights have infiltrated the Freemasons in an attempt to reignite the Crusades. And watching them all from the shadows is a mysterious figure known as The Bookkeeper.