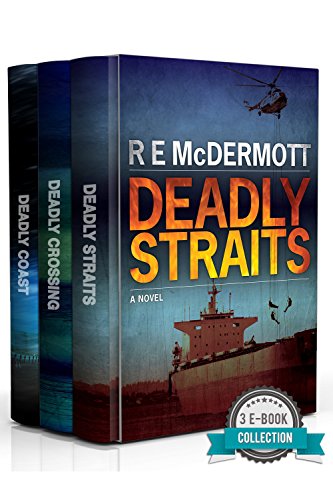 Meet Tom Dugan - A globe-trotting marine consultant and very part-time CIA asset, Dugan only agreed to take a few pictures in Chinese shipyards now and again under the cover of his regular business operation. Then 'The Company' needed a fall guy, and it all went terribly wrong.

Meet Tom Dugan - A globe-trotting marine consultant and very part-time CIA asset, Dugan only agreed to take a few pictures in Chinese shipyards now and again under the cover of his regular business operation. Then 'The Company' needed a fall guy, and it all went terribly wrong.

WMDs (Weapons of Mass Destruction) are all around us, hiding in plain sight. One in just the right place will bring the world to its knees. When a cabal of international terrorists engineers not one act of terror, but three, part-time spook turned CIA scapegoat Tom Dugan is the only one with a clue.

But no one will listen. They’re too busy trying to kill him.

Deadly Straits is a non-stop thrill ride, from London streets, to the dry docks of Singapore, to the decks of the tankers that slake the world's thirst for oil, with stops along the way in Panama, Langley, Virginia, and Teheran. Richly spiced with detail from the author's 30 years sailing, building, and repairing ships worldwide, it is, in the words of one reviewer, "fast-paced, multilayered and gripping."

Tom Dugan has barely put his life back together and started his newly formed business partnership with Alex Kairouz, when one of their ships is captured by murderous Somali pirates.

When a possible link between piracy and terrorism comes in to play, the US and British governments halt all negotiations for captives, and a frustrated Dugan defies the authorities to take matters into his own hands. But his cobbled together rescue operation stumbles across something far more sinister than piracy — a rogue salvage operation for a long lost weapon of mass destruction. Dugan and his ragtag little band of volunteers find themselves the last line of defense between the world and a terrifying bio-weapon.

Weaving historical fact with speculative fiction, Deadly Coast takes the reader from London board rooms into the very real world of modern day pirates — and their victims.

Human trafficking is all around us, but when it touches those close to Tom Dugan, he and his friends deliver their own style of justice.

Months have passed, and life is good for Dugan by any measure, as he rolls through the London night, the woman he loves in the taxi beside him. Then his phone rings, alerting him to the arrival of two old Russian friends with a very big problem.

Dugan’s attempts to help his friends rescue an innocent girl from the Russian mob plunge him into a world he’d scarcely imagined, endangering him and everyone he holds dear. A world of modern day slavery and unspeakable cruelty, from which no one will escape — unless Dugan can weather a Deadly Crossing.