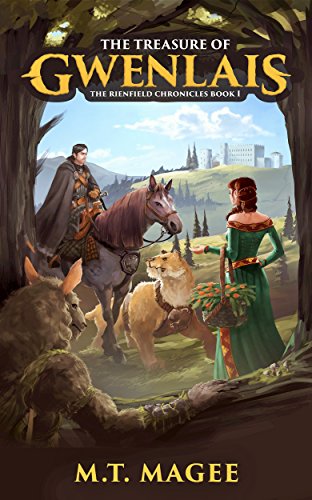 An epic medieval romantic fantasy. A domain filled with beauty, danger, amazing races and cultures. You will find the love and strong ties of family. As well as romance, humor, adventure and tragedy, while the people and beings of Rienfield, search for peace and truth in their way of life.

Princess Laurel of Gwenlais, finds herself tragically and quickly thrust into a world of danger, so unlike the idyllic and sheltered life she has known. These dangers from an unknown enemy, also unexpectedly throw her into the arms of Caleb, the warrior Prince of Heathwin, the nearby kingdom in which Gwenlais has a tense alliance with. The more refined people of Gwenlais, find their neighbors and protectors of the West necessary, but consider them uncouth and sometimes barbaric.

The long and bloody feud between Heathwin, and the mysterious, frightening, and misunderstood, race of beings, called the Rabkins, had finally reached an uneasy truce, by the hard fought and diligent efforts of Prince Caleb. This fragile agreement, was soon shattered by an attack from outside, that threaten both kingdoms of Gwenlais and Heathwin. Laurel and Caleb find themselves, not only fighting for the peace and existence of their kingdoms, but fighting for their new found love that is imperiled at every turn from a nameless enemy, and their own people as well.

Laurel follows her calling, by beginning her training in the ancient healing arts of the Ollams. She soon finds that her skills may be needed to heal more than just the physical wounds of others, but also the wounds of the heart, long put upon by the people of both she and Caleb's kingdoms by the mistrust and bigotries of either side. As they draw closer together, they discover just how far this unknown enemy, has gone to tear them apart from within. They must together, find a way to rise above old and long standing prejudices, and form a much stronger alliance in order to fight against the new enemy from outside of their borders, that threatens their very survival.