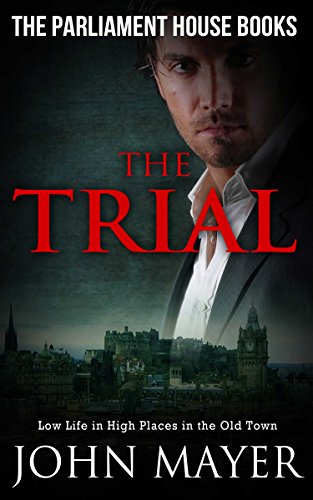 The Trial is Book One in the addictive Parliament House Scottish crime series. If you like heroic lawyers, scandalous twists, and edge-of-your-seat suspense, you'll love this gripping legal thriller.Can Scotland's most determined lawyer clear his name, and bring justice to the corrupt ?

In Parliament House,scandal can be deadly. A maverick lawyer. A secret worth killing for.... Brogan McLane has always been an outsider. Born on the wrong side of the tracks, he learned to fight tooth and nail for justice in the mean streets of Glasgow, Scotland. But now, after years of of hard work and study, McLane has been 'Called to the Bar', and become a member of the most prestigious legal club in the country; The Faculty of Advocates in Parliament House...

But his legal career may be cut short before it even begins. In the wake of a seedy sex scandal, a High Court Judge is found dead... murdered in his palatial estate. The victim's wealthy and connected friends close ranks. One of them knows the killer's identity, but they care more about appearances than justice. They need to pin the heinous crime on a scapegoat. And who better than 'outsider' Brogan McLane...

Out on bail, his career on hold, McLane needs to get ahead of his enemies fast, or go down for a crime he didn't commit. Enlisting the help of his scrappy Glasgow friends, and an honest police commander, the rogue lawyer decides there's only one way to clear his name... find the real killer!

From Russian mafia bordellos to the halls of Scotland's highest court, McLane must use every trick in the book to catch a murderer as skilled at legal manipulation as he is. But will it be enough to win the most important trial of his career... His own?