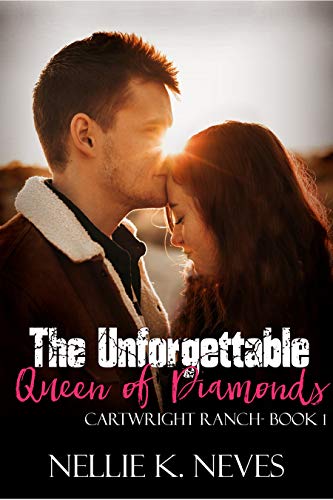 The Unforgettable Queen Of Diamonds

She's dreamed of a career in the spotlight, but now danger has her center stage. Roman, an undercover FBI agent, faces a decision: Keep her close and risk her safety, or turn her loose and let her fall victim to a trap. Either way, she's in trouble.

She's dreamed of a career in the spotlight, but now danger has her center stage.

Kennedy lives in the shadows, but craves something more. Through her work, she makes other singers' dreams come true. With the Summer Concert Series waiting in the wings at Cartwright Ranch, she needs to find a few hot new acts to bring in the crowds. But when Roman, a local music producer, enters her life, for the first time she considers putting her own happiness first. Even if it means the world falls apart around her.

Even though he's a field-rated agent, Roman Palermo prefers to stay out of the heat. With a head for numbers, he spends most of his time with his nose in the books, but that's not an option this time. Roman's ability to blend in and become forgettable makes him the perfect agent to go undercover as a local music producer. He's assumed it was his lot in live, to pass by without anyone seeing him, that is, until he meets Kennedy. For the first time, someone truly sees him. Problem is, she thinks he's a music producer, and he's worried she's too young.

Neither issue stops the chemistry from igniting, not even once Roman discovers Kennedy is tangled up with the players in his new case. Caught at the center of a brutal storm, Kennedy doesn't realize the danger surrounding her.