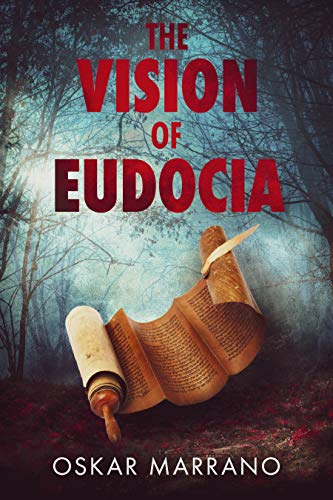 The Vision Of Eudocia

A young couple discovers the story of the Temple Scroll, an ancient document, which generated much interest. A series of murders related to the scroll forces the couple to escape, but even thousands of miles away, they can’t hide from the past.

No matter how far away you run, you can't hide from the past.

Naomi, a young Jewish woman from Jerusalem, runs away from home in order to avoid an arranged marriage forced on her, only to fall in love with Captain Gareth O'Reilly, an officer serving in the Land of Israel during the period of the British Mandate of Palestine.

Together, the young couple discovers the story of the Temple Scroll, an ancient document written in the sixth century, which generated much interest among academics as well as religious scholars who will go to great lengths to get their hands on it.

A series of mysterious murders related to the search for the coveted scroll, changes the scene and forces the two young lovers to leave everything behind and get as far away from Jerusalem as they possibly can to save their love. But even thousands of miles away, the past does not cease to pursue them…