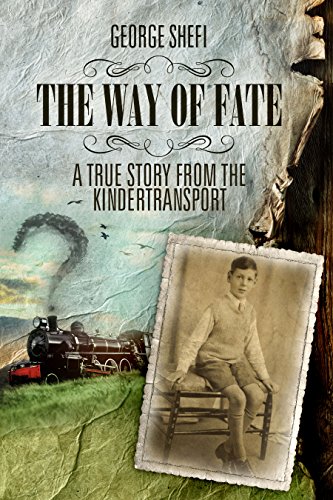 The Way Of Fate

At age 7, the author is saved from the Nazis on the Kindertransport. He never sees his mother again. Read the amazing story of his wanderings in England, America, and finally “home” to Israel, where he served in the navy and established his family.

George Shefi's entire world falls apart when he is only seven years old!

This book opens with the happy childhood of the author in Germany, where he was raised by a loving single mother, grandfather, and aunt. The Nazis came to power when he was two. After the horrors of Kristallnacht, six years later, his mother managed to send him to England with the Kindertransport, to save his life. He did not realize that waving goodbye would be the last time he would see his mother; she was murdered in Auschwitz.Join him on his journey as a homeless child refugee via England, Canada, and America finally to his homeland

Shefi tells this amazing story with humor: his wanderings in England and journey to an uncle in America during World War II and his immigration to Israel in 1949. There he finally found his home, served in the navy, and established a loving family.Be there when he discovers his own long lost father completely by chance!

The book describes his remarkable life and his family, especially the unbelievable sequence of events that led to his discovery of his father in Australia, whom he met for the first time at age 35, when Shefi was already a father of three daughters.