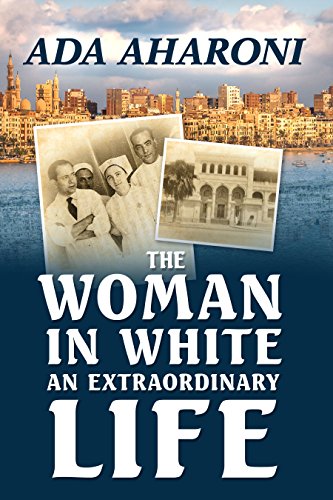 The Woman In White: An Extraordinary Life

Remarkable Thea Woolf is inspiring, strong, and wise – an incredible role model, called “Sister Theresa of the Middle East.” A strong anti-war protest, the book’s depiction of warm cooperation between Jews and Egyptians offers hope for the future.

This is a book about the remarkable life of Thea Woolf, the Head Nurse of the Jewish Hospital in Alexandria, Egypt, during World War II. It is about choosing one's own road, about the power of human will and the love of mankind. Thea speaks from the heart; she is real and inspiring, strong and wise - an unforgettable role model who has been called "Sister Theresa of the Middle East."

This is not only an exciting and revealing personal account, but also a kaleidoscope of astonishing historical episodes from World War II, giving the reader a sense of having lived through those important events. Its narrative registers a strong protest against war and also instills in us the hope that it can one day be banished from our lives forever. This fascinating biography shows Muslim-Jewish harmony that gives hope for the future. Whoever knew that Muslim Egyptians helped Egyptian Jews save Jewish refugees from the horrors of the Nazi Holocaust during World War II?

In this book, we discover how Thea Woolf initiated and led this heroic mission. The close collaboration depicted between Alexandrian Jews and Egyptians, and their vital cooperation in saving Jews from the Nazi Holocaust, is an important example of what the relationship between Israelis and Palestinians could be today.

The amity with which Muslims and Jews lived in the recent past proffers the hope that it is possible to aspire to such a reality in the future.The Woman in White: An Extraordinary Life, also describes the wonderful Jewish Hospital in Alexandria, that saved the lives of many soldiers of the Allied army under Montgomery, fighting Rommel at El Alamein.