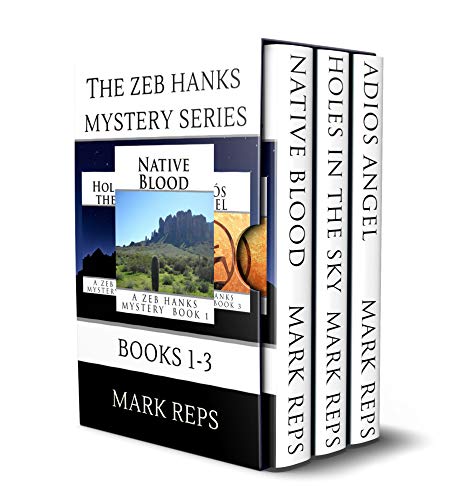 The old west crosses paths with the new west in the first three books of The Zeb Hanks Mystery Series full of murder, lust, greed and betrayal. Fans of Longmire and Hillerman will enjoy getting to know Sheriff Zeb Hanks, a modern lawman who strives for justice but doesn't always play by the rules.

The old west crosses paths with the new west in the first three books of The Zeb Hanks Mystery Series, full of murder, lust, greed and betrayal. If you love the Longmire Series by Craig Johnson or books by Tony Hillerman, try getting to know Sheriff Zeb Hanks, a modern lawman who strives for justice but doesn't always play by the rules. Explore the roots of rural Graham County, Arizona and the San Carlos Apache Indian Reservation and their complex intertwining natures.

In NATIVE BLOOD (Book 1) the ritual killing of a young Apache girl on a reservation in rural Arizona takes the reader through many complex layers of relationships between Apache and Anglo cultures. The myth and spiritual fabric of the Apache community pulls Zeb Hanks, a small town sheriff, through a personal journey, making the murder not just a crime to solve but a cathartic passage.

In HOLES IN THE SKY (Book 2) a priest is killed in an apparent suicide in a rocking chair on the highway at the foot of Mount Graham. Meanwhile, Sheriff Zeb Hanks and Jake Dablo investigate potentially unscrupulous land deals occurring on the mountain. The team must unravel the complex weave of sacred holy places, land rights, and the ever increasing body count which means big time trouble for the small town sheriff.

In ADIOS ANGEL (Book 3) Sheriff Zeb Hanks has his hands full when sociopath Jimmie Joe Walker, recently released from an Arizona state prison, masterminds a devious plan to make himself filthy rich. His plan involves Ángel Gómez, a down-on-his-luck half Mescalero Apache/half Mexican whose alcoholism and far-fetched dreams make him an unwitting dupe in Jimmie Joe's plans. ADIÓS ÁNGEL reveals the complexities and contradictions that are part of life’s gritty nature. It is a story of evil, alcoholism, love and betrayal.