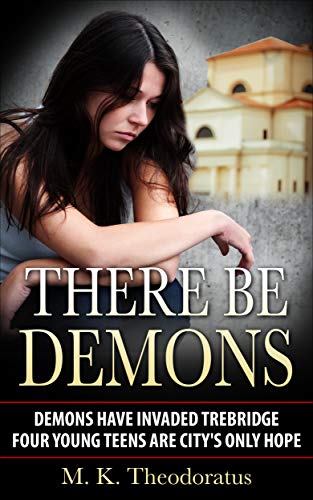 Britt Kelly didn't even know demons existed until she was drafted to fight them. The Gargoyle Guardians of the city must rush to train her if she and her friends are to survive.
There Be Demons delivers a world filled with magic, twists, chills, and treachery.

Before she was drafted to fight demons, Britt Kelly didn't even know they existed, let alone have time to fight them.

After her parents' divorce, Britt Kelly's life shatters when her family moves into her half-sister's apartment in the projects. But her problems don't end with her being the family babysitter and adjusting to a new high school. When she is chosen to become an Angeli demon fighter at the side of the city's Gargoyle Guardians, something's must break.

Gillen, the gargoyle leader, races to teach Britt and her four demon-fighting companions how to control magic to defeat the demons. His lessons get sidetracked when the teens fail to follow directions. Even more confusing, Britt and fellow fighter, Cahal, crush on each other.

All Britt wants to do is get grades good enough to escape the projects, but first, she must win the fight against the evil that threatens her city.