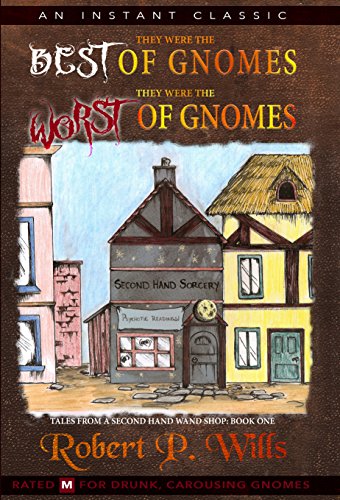 Two Gnomes meet on the field of a battle! They’re not fighting; they’re collecting wands. The pair decide to combine their used wand shops. Fake sales, shady business deals, and general pandemonium ensue. Oh, and a town-wide fire. And drinking. And barroom brawls. And carousing. You know- typical Gnome stuff.

As Grimbledung gets used to his new life of respectable shop ownership, the pair end up befriending Nulu Bentknees the Trolless across the street, Pozzuoli Consigliore the Dwarf next door, and even the town constable- Akita Finnish (a Werewolf who would rather bask in the sun than do anything else). Along with Big Julie, the headmistress of the school of magic down the road, this diverse group learns to deal with Grimbledung's antics as they try to refocus his outlandish get rich schemes and unpredictable outbursts into something more productive. Or at least more quiet!

Things start to look up until Grimbledung manages to annoy the entire Great Halfling Empire. Well, at least the Halfling soldiers in town.