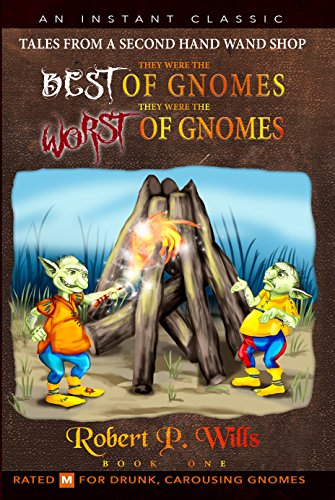 Two Gnomes meet on the field of battle! Scrounging for wands, of course.
Reputable shop owner Drimblerod tries to adjust to life with conniving Grimbledung. Grimbledung's Pixie Madness doesn't help. In the end, it all works out nicely.
That is if you think "town-wide raging inferno" is ‘working out nicely’.

Drimblerod thinks he has found the perfect partner- someone he can trust (he's a fellow Gnome, after all) and one that will keep away pesky non-buying window shoppers. Little does he realize that his new-found partner suffers from Pixie Madness! And not the good kind.

Along with Big Julie, the headmistress of the school of magic down the road, this diverse group learns to deal with Grimbledung's antics as they try to refocus his outlandish get rich schemes and unpredictable outbursts into something more productive. Or at least more quiet! Or at maybe even get him to pay for some of his drinks.