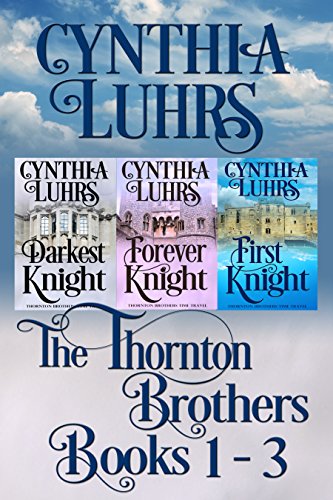 Curl up with your favorite beverage and cross an ocean of time to while away the day in medieval England with the Thornton Brothers. This clean romance boxed set contains the first three books, Darkest Knight, Forever Knight, and, First Knight.

Curl up with your favorite beverage and cross an ocean of time to while away the day in medieval England with the Thornton Brothers. This clean romance boxed set contains the first three books, Darkest Knight, Forever Knight, and, First Knight.

A dark and stormy knight…No really. It was storming…and rather dark in the Tower.
An unexpected trip to London was supposed to be the perfect distraction from Anna's stress-filled life. Minding her own business, drooling over so many jewels, Anna Waters winds up hopelessly lost and finds herself locked in the infamous tower.

Who knew an antique locket would lead her to a knight with a heart buried underneath thirty feet of stone?
Searching for a way out, she stumbles over an antique locket with half the picture missing. Lightning strikes and when Anna wakes…she's still in the Tower of London…700 years in the past.

She crossed an ocean of time for him. Can she save them both before it's too late?
John Thornton almost lost his head and saw his family ruined all because of a woman. Presumed dead, he became the infamous bandit of the wood. Captured and awaiting execution in the Tower of London, a strange woman appears out of the darkness. As they flee across England, John finds himself chipping away at the stone surrounding his heart. And longing for a life with his mysterious rescuer. No matter the cost.

A tiny scrap of fabric sent her hurtling through time…
Elizabeth Smith was good at taking charge. Fixing what she believed was wrong with the world. And then she met a lazy knight with no desire to better himself.

A wager lost…
Before the rakes of the regency period, there was Robert Thornton, Lord Highworth. Content to spend his days drinking, wenching, and hunting, Robert cared not what happened in the world around him. Let his brothers see to war and fighting. Perhaps if he drank enough he could forget the faces of the dead.

Sparks ensue…
When Robert offers the strange lass up as the wager, Elizabeth vows to hate him forever. Wanting nothing to do with the lass with beguiling eyes, Robert doesn't know whether to kill her or kiss her…

A dig on the border of Scotland sends a free-spirited damsel tumbling through time to medieval England.

Jennifer Wilson was happy spending the summer on a dig and putting off finding a job. When the earth swallows her during a terrible storm, she finds herself looking at a bustling Somerforth Castle not the ruins she'd been painting. Medieval England is full of interesting sights...and knights. Perhaps she could stay a week or two, it would be the adventure of a lifetime.

Pre-occupied with war, Edward Thornton has met strange lasses before. He suspects from whence she comes. But a dangerous threat across the border threatens to tear them apart.