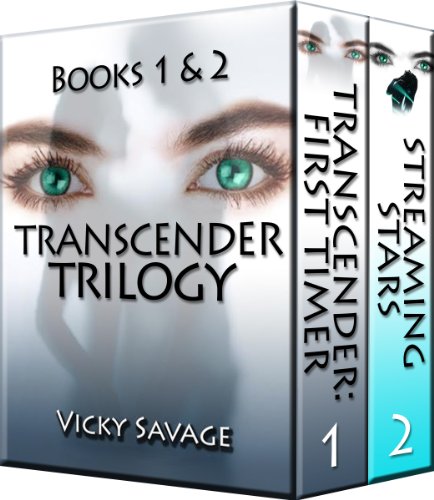 The Transcender Trilogy is a fast-paced, action-adventure-paranormal romance series beloved by fans of science fiction, fantasy, and young adult.

In TRANSCENDER: First-Timer, Seventeen-year-old Jaden Beckett is plucked from her quiet Connecticut existence and dropped into a post-apocalyptic alternate earth where the surviving population resides in enormous domed cities. Agent Ralston of the Inter-Universal Guidance Agency befriends Jaden and helps her assume a new identity while promising to find a way to get her home safely. But in her new life Jaden's a princess, and she has her mother back--a dream she never imagined possible. So when she finds herself falling for the darkly compelling Ryder Blackthorn, all thoughts of returning home quickly vanish. Will IUGA force Jaden out? Or will she discover the truth--she's a Transcender and capable of traveling among parallel worlds at will.

In STREAMING STARS, Jaden returns to Domerica for an opportunity to choose her ultimate destiny. Agent Ralston sets out three paths open to her: remain with her loving family in Connecticut; resume her alternate life in Domerica with the man she loves; or embrace her astonishing gift and join the Transcender community permanently. Jaden believes she knows where her destiny lies, but her mother's grave illness, Ryder's confusing actions, and a scheming uncle who has his eye on the throne complicate her decision. Will Jaden finally follow her heart? In the end, her decision is anything but simple.