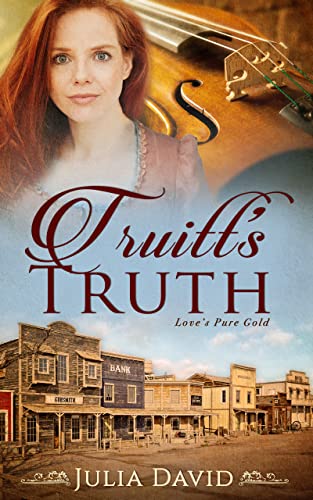 How could Truitt, the toughest man in Hangtown go weak? Copper hair, blue eyes, and a violin-like fire in her hands will work. What about taking refuge together in a dark cave with light snow falling? Maybe he has a chance until he burns the violin. Now he’s really in trouble.

Come Along for an Unforgettable Journey of Romance and Adventure.
Inside the California Gold Rush of 1849, the toughest man in town, Truitt, is ready to face the truth. Putting his fighting career aside, he needs to get out of Hangtown. The unruly mining town named after the night his father was unjustly hung.

But mudslides and Truitt Emerson do not mix.
Now he’s stranded with two young ladies from back east. His boss's fiancée is difficult, but her gorgeous copper-haired ladies maid has him watching her every move. Why does she clutch that silly case?

When Cassidy O’Ryan was pulled from her Irish Grandparent's home, her beloved violin became her prized possession. To avoid her father's matchmaking, she promises to travel to the gold rush town of Hangtown to wed her cousin she’s only met as a child. What she didn’t promise was that she wouldn’t trade places with her ladies maid and pursue her love of singing and violin in the new state of California. The young women had months to plan the switch. It shouldn’t be a problem until her cousin sends Truitt Emerson to pick them up and escort them to Hangtown. Burly and unflinching, Truitt is not only the town boxer, but he’s also her cousin’s bodyguard.
The sudden desire to trust in this handsome stranger is unusual.

Cassidy now has her own fight to find her truth, her freedom in this rugged mining town.

Neither Truitt nor Cassidy are prepared for the compelling attraction that's desperate for an honest future.
Can the truth prevail or is it too late?