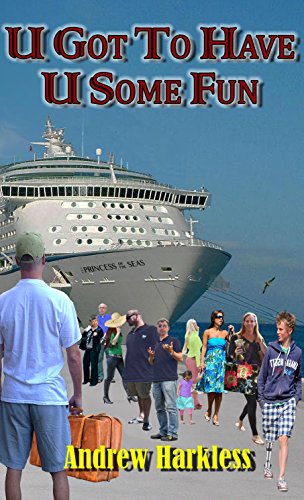 U Got To Have U Some Fun

After losing his son, a mystery ticket sends John Smith on a 7-day cruise. Colorful characters teach him about surviving grief and loss, romance, second chances, patriotism, and friendship.

John Smith, a recently divorced man and as average as his name implies, arrives home from his job at a rubber band factory to find a ticket for a cruise ship vacation in his mailbox. He assumes the ticket is from his son because Carson made him promise to break free of his boring life and, for once, travel and have some fun and the note included simply said, "It's Time." John is puzzled because his beloved, only child was killed six months ago while serving in the Army in Afghanistan. In order to fulfill the promise John made to Carson and though filled with anxiety about leaving his routines and comfort zone, he goes on the cruise.

During seven days of various Caribbean destinations and sea days, John meets a diverse blend of passengers and crew who influence his life in monumental ways. Each new day brings new experiences, new pleasures, a new piece of information about the source of the ticket, and a new challenge to overcome.

As John begins to emerge from his shell—less and less average, more and more adventurous, and destined for a new and richer life—the question still looms: Who bought John's ticket?

Ordinary and typical John Smith's life-changing vacation where the average baggage is anything but, challenges you to take stock of your own life. U Got to Have U Some Fun will have you crying, laughing, crying while laughing, angry, rooting, and ultimately saying yes to one question: Would I do anything for my children, even change? Whether you are one of the 20 million people who cruise each year or someone who rarely even takes a vacation, this vivid work of fiction feels like the real thing.