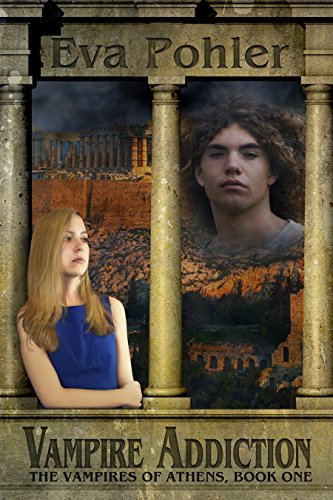 Vampire Addiction: The Vampires Of Athens

A teen from New York studies abroad in Athens and discovers that vampires and demigods are real at a time when war is brewing between them. After making friends on both sides, she unwittingly becomes a catalyst to an uprising led by Dionysus, lord of the vampires.

Seventeen-year-old Gertrude Morgan, the only child of one of the wealthiest couples in America, is shipped away from her home in New York City to the American school in Athens against her will. Her parents just want to get rid of her, and she knows it.

Although she has no friends (her private schoolmates all seem fake), she sees no point in making any new ones on her trip, since she'll only be visiting for one school year. Despite her efforts to remain aloof and in the world of her books, she falls in love with her boisterous and affectionate host family, as they do her.

But the city of Athens has secrets.

Her host family calls them "tramps." In Greek, they are called vrykolakas, or "vryks," which sometimes gets translated to "freaks." They are the vampires of Athens, created centuries ago by the Maenads. They live in caves beneath the acropolis without economic resources and according to rules imposed on them by the Olympians.

First and foremost, they are forbidden from turning humans into vampires. The human will not turn unless all of the blood is drained, so a vampire is allowed to drink up to one pint per month from a willing mortal. Some mortals are willing because a vampire bite will infect the body for six hours, and during that time, the mortal has the powers of the vampire: flight, invisibility, strength, speed, x-ray vision, and mind control. Such great power can become irresistible, though dangerous and addicting to mortals...

As Gertie uncovers the unfathomable secrets of this ancient city, she is drawn to the beauty and deep thoughts of a boy she first met on the bus into Athens--Jeno. Her host family and another boy she later learns is a demigod warn her to stay away from him, but her curiosity gets the best of her and she unwittingly becomes a catalyst in an uprising led by Dionysus, the god of wine and lord of the vampires.