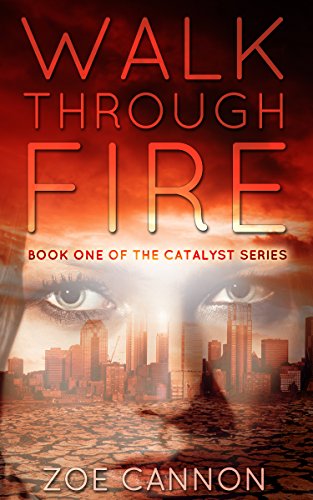 Twenty years after a nuclear war, a radiation-worshipping cult spreads through the ruins of Washington, DC. As a reluctant agent of mystic forces she doesn’t understand, it’s Shea’s job to stop them. If she succeeds, she could regain something that was stolen from her long ago: a real family.

Radioactive ruins. A radical anti-technology faction known as the Swords of Eden. Sinister scientists performing secret experiments. Shea knows what horrors await in the world outside the sanctuary she built for herself. Her mother is dead; her father is gone; her body is marked with the scars of what the outside world did to her. All she wants now is to be left alone.

So when she learns she's a Catalyst, someone born to save the world by making seemingly-insignificant changes that ripple into larger effects, her answer is simple: no. This world isn't worth saving.

Until she's given her first mission: save the followers of a radiation-worshipping cult in the remnants of Washington, D.C. Until she discovers the secrets that tie the cult's eccentric prophet to her own past. Until she sees a chance to regain something that was stolen from her long ago: a real family.

But there's more than radiation worship going on in the ruins, and the prophet's plans could put all his followers in the crosshairs of Shea's old enemies... or cause devastation that reaches far beyond the cult. And as she races against time to stop him, Shea will face a threat that terrifies her more than any of that: the risk of starting to care about the world outside her walls.