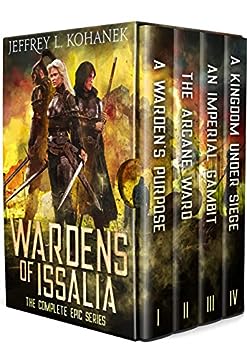 An enemy nation rises, fueled by subterfuge, assassinations, and fire-powered weapons. A team of young agents must infiltrate and eliminate this threat before all is lost.
Books in this boxed set:
1.A Warden's Purpose
2.The Arcane Ward
3.An Imperial Gambit
4.A Kingdom Under Siege

An enemy nation rises, fueled by subterfuge, assassinations, and fire-powered weapons. A team of young agents must infiltrate and eliminate this threat before all is lost.

Meet the Wardens of Issalia:
Everson is an awkward, disabled teen who dreams of a better tomorrow. Blessed with a brilliant mind, he melds magic and science in ways never before seen. His greatest discovery could liberate him and change the world...

or, it could destroy everything.

Quinn is Everson's overprotective sister. Although average in every way, Quinn's fiery spirit and relentless determination fuel her desire to protect those who cannot protect themselves. Trained as an espion, she finds herself alone and in the heart of an enemy stronghold.

If only she knew whom she could trust.

Brandt, the second son of a king, is a prankster who lacks a sense of purpose. When he joins the wardens, he is forged into something more, leveraging his fearless nature and his skill with magic.

Will his courage be enough when the fate of thousands hangs in the balance?

Cassie is Brandt's twin sister and his coconspirator until things go too far. She joins the wardens and discovers magic abilities unlike anyone has ever seen.

What new ability will she discover next?

Puri is the premier archer among her people. She joins the wardens to train as a ranger but soon finds herself on missions rife with danger.

How many will die if she fails?

Curan, the son of a renowned warrior, joins the wardens with dreams of making his father proud. Blessed with strength and quickness, he trains to fight while augmented by magic, able to slay enemy soldiers as if they were children.

Can he overcome the ghosts of those who die by his sword?