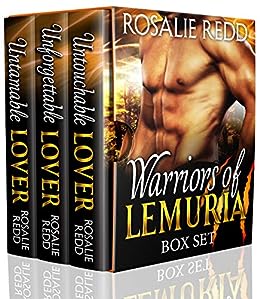 Across the globe, shape-shifting Lemurian warriors battle against a deadly enemy in the dark of night. The prize—Earth’s most precious resource—water, and the fate of humankind. As a band of heroes each find their forever mates, they must face their biggest fears if they are to survive.

Even in the midst of war, love flourishes...

Across the globe, shape-shifting Lemurian warriors battle against a deadly enemy in the dark of night. The prize--Earth's most precious resource--water, and the fate of humankind. As a band of unlikely heroes each find their forever mates, they must all face their biggest fears if any of them are to survive.

Discover award winning author Rosalie Redd's world of dark, sexy shifters on a mission to save the world. WARRIORS OF LEMURIA BOX SET contains three complete stories featuring the strong, honorable males of the Lemurian shifters. If you like dark, sexy, broken heroes in need of redemption and intense emotional storylines, this series is for you.

Untouchable Lover (Book 1)
A king who must decide between his kingdom or the feisty female that tempts his heart.
A female on the run who can't escape her past, her future, or her desire for the sexy king.
A forbidden love romance that will tug on your heartstrings.

Unforgettable Lover (Stand-alone)
A Prince meets the female of his dreams during a masked shifter ritual called Betram, but she slips away before he can capture her name.
For a merchant's daughter Betram offers one night of freedom from a destiny she doesn't want, but she never imaged she'd lose her heart to a male she can never have.
A Cinderella remake with a paranormal twist.

Untamable Lover (Book 2)
A feline shifter alpha male who thinks he's in charge never expected his second-in-command would press him to the limit while pushing all his buttons with her hot, fiery temper. Not only must he battle the enemy, but also his desire to claim her as his mate.
Falling in love with the irresistible and sexy Pride leader isn't something Aramie planned, but she fights her yearning for him even as she longs to pull him close.
An enemies-to-lovers romance with fur, fangs, and claws.