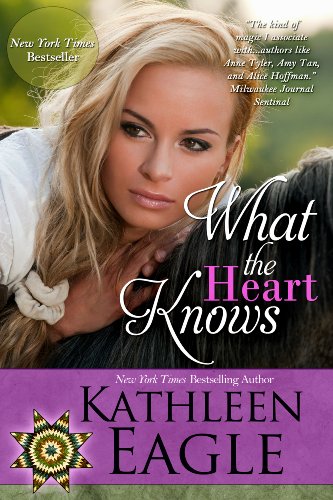 What the Heart Knows

A dangerous job. A hit-and-run. Another life at risk. Hope for a second chance. Reese Blue Sky is the hometown hero who harbors a secret. Helen Ketterling is the woman he loved, lost, never thought he'd see again. And her secrets trump his.

A secret son. A lost love. A dangerous job. A frightening risk.
A second chance at the happiness their hearts were once afraid to share.

Thirteen years ago, alone and secretly pregnant, Helen Ketterling left her job as a school teacher on the Bad River Sioux Reservation in South Dakota. Her summer love affair with Reese Blue Sky had ended abruptly when he left the reservation to pursue his chance at a NBA career.

Now her new position, a dangerous assignment for the Bureau of Indian Affairs, and Reese's father's sudden death bring them both back to Bad River for a reunion at once fiery and bittersweet. Not only does Helen fear a custody battle if Reese learns that they share a son, but she can't reveal that she's working undercover at the reservation's casino.

And Reese has his own secret--one that ended his basketball career and could endanger his son. While much has changed in the years since he left home, he finds that his roots and his heritage still matter as he reaches for reconciliation with his past. Family ties are the basis of Lakota tradition, and all are threatened by political intrigue and corruption. Was Reese's father murdered because he planned to blow the whistle on the casino's outside management company?

As their investigation into his death leads them down a treacherous path, Reese and Helen struggle to bridge the memories and heartaches of a time when she was an idealistic young teacher and he was a lonely man on the verge of reaching for the stars. They'll have to search deep inside themselves to challenge the doubts that have kept them apart.