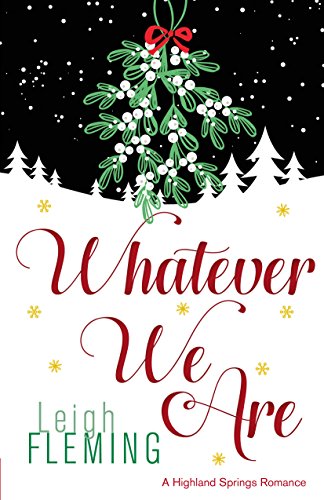 Tucker Callum has always wanted to play Mr. Claus at Highland Springs’ Mistletoe Ball, but he needs a Mrs. Claus to win the coveted role. Liza Fisk believes Christmas is cursed but reluctantly agrees to help Tucker by pretending they’re a real couple. Can Christmas kisses and mistletoe magic turn a fake relationship into a real romance?

Liza Fisk is cursed. The holidays often mean disaster for her, including a car accident ten years ago that put her in a coma. She's learned to forsake the holiday spirit due to continued calamity…but her luck is about to change. The Highland Springs city council is accepting secret bids on the abandoned "castle" her great-grandfather built and Liza is finally going to realize her dream of opening an art gallery. Until her arch nemesis rolls back into town with plans to ruin her Christmas. Again.

This time, Liza is taking preemptive measures and, in a moment of insanity, announces that she and her brother's best friend, Tucker, are playing the town's Mr. and Mrs. Claus.
Brewery-owner Tucker Callum knows he's going to win the castle with his proposal for a proper English pub. He's so sure, in fact, that he's already sold his house and moved into a camper behind the brewery. But his buddy Liza is afraid he'll freeze to death in the West Virginia winter and insists he move into her spare bedroom. She's made it crystal clear in the past that they could never be more than friends, but now that Tucker's living in her house and playing the role of her holiday husband, he's secretly hoping their ruse will turn to reality.

Liza slowly opens her heart to Tucker and the holiday spirit…until she learns that he is bidding against her for the castle and deliberately keeping it a secret. Will Liza be able to trust Tucker in the end or will the Christmas curse strike again?