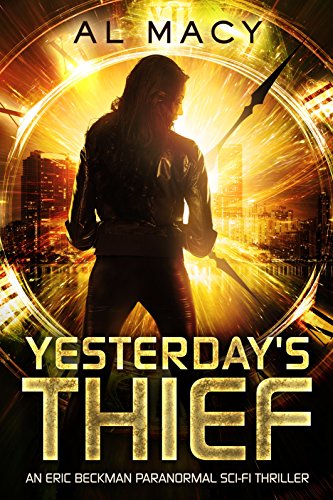 Eric Beckman is a mind-reading detective.
The case of his life lands in his lap when a comatose woman materializes during a televised baseball game.
When she wakes up she puts Beckman under her spell. He vows to figure out where—or when—she came from, even if it kills him.

Although he reads only the conscious thoughts of the people he interviews, it usually gives him enough of an edge to overcome his inexperience as a PI. But mind reading is hell on relationships. Trusting comes hard when you know what people are really thinking.

The case of his life lands in his lap when a beautiful woman materializes during a televised baseball game. She floats in midair, then drops to the ground, comatose.

Beckman is at her bedside when she wakes up. From the moment she opens her eyes, she has him under her spell. He vows to figure out where—or when—she came from, even if it kills him.

The stakes increase when she disappears without a trace. Worse, she holds the key to a worldwide energy catastrophe. If Beckman can't find her and unlock her secrets, economies will collapse, and the world will spiral down into chaos.